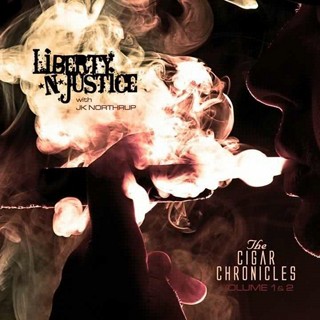 Review:
Even those who are big fans of bar bands will have a hard time picking over the first volume of The Cigar Chronicles, the new double disc set from veteran glam rockers Liberty N’ Justice. Consisting of a baker’s dozen renditions of what are presumably band faves, the song selection vacillates wildly between earnest picks and blatant stabs at cheesy novelty.

Not only is there arguably zero market for heavy metal covers of “Ice Ice Baby”, “MMMBop” and “Dancing On The Ceiling”, but, considering the guest list involved, these tracks are a complete waste of talents like Eddie Ojeda, Kelly Keeling and James Christian. “Iris” and “Bye Bye Bye” actually come off respectably enough, but separate them from the context of the abysmal tracks surrounding them and I doubt even those will be making anyone’s mixtape anytime soon.

Volume 2 is where the originals lie, and one would do best to just consider that the actual album, treating Volume 1 as a disposable bonus disc (even though it’s positioned as anything but). Even then this is a confusing project, so a little context is in order — bassist Justin Murr is the only original member of Liberty N’ Justice remaining, so essentially this is a pick-up band. That would seem to explain the plethora of guest singers — not to mention other musicians — but nope, Liberty N’ Justice boast a full time vocalist in David Cagle, a permanent guitarist in JK Northrup and a couple guys of indeterminate commitment listed on keyboards and drums.

That said, you practically need a doctorate in melodic rock to ascertain who’s doing what on this album — there are guests listed on every track but instruments are not attributed at all. I literally have no idea whether I’m hearing David Cagle‘s voice on any given song, let alone who’s playing the rest of the instruments.

Quibbles aside, this is a fine if unexceptional batch of originals. Liberty N’ Justice are technically a Christian rock band but they don’t beat you over the head with it by any stretch. Aside from a lack of overtly sexual lyrics this fits right in there next to any other retro hard rock act. One of the more notable songs is undoubtedly “Sin”, which features one of the last performances by Jani Lane… which just goes to show you how long this project has been gestating. Murr was right to begin the set with “Devil His Dues”, both the best written song on the album as well as sporting the strongest vocal performance by Derrick LeFevre of Lillian Axe.

So in spite of a monumentally confusing marketing strategy — poorly annotated credits, and why front load your comeback record with covers of lame songs that won’t appeal to your fan base — The Cigar Chronicles is a welcome return to form by a band many had long given up for dead. Give it a shot, but do yourself a favorite and skip directly to Volume 2… you’ll thank me later.