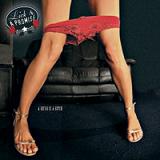 Review:
Four Germans and an American walk into the studio… ‘insert punch line here’. It seems that there is a lack of originality when it comes to rock these days, so I’m always surprised when something grabs and holds my attention.

Besides having a smokin’ hot cover, Lick And A Promise really deliver an album that’s very well written and has great musicianship throughout. These guys make full use of their two lead and rhythm guitarists, the grooves are infectious and are very uncliched with a great thick sound and a pounding bass beat.

The band attributes AC/DC, Led Zeppelin, and Aerosmith (among others) as influences. Although I don’t hear any similarities musically to AC/DC, the raw attitude and rockin’ riffs definitely connect the dots. There seems to be many new bands who trumpet the fact that their sound is a throw back to the rock of the 80’s and early 90’s, and while Lick And A Promise have this vibe to them also they also fit in with today’s best rockers.

Lick And A Promise open up and set the tone of A Bitch Is A Bitch with “Give It Up”. One of the lyrics from the song is, “I don’t want to fuck you because I want to, but because I can”, it’s four minutes of sleazy sweaty rock. There are a lot of great songs on A Bitch Is A Bitch, but my favorite has to be “That’s Okay Now”. It begins with a mid-tempo pace, but about 40 seconds in the band kick it up and never look back. Other highlights are “Gonna Be Alright”, “Going Down Slow”, “Wanna Know Why” and “Rock Star”.

All in all A Bitch Is A Bitch is a great a CD and leaves me excited about the next Lick And A Promise release.