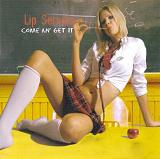 LIP SERVICE
COME AN’ GET IT
Released 2007 (Lip Service)

Review:
Earlier this year an unknown Southampton, U.K. band sent me a CD single that proceeded to knock me on my ass. That band was Lip Service and now they have returned with their debut full-length entitled Come An’ Get It.

The two Cinderella influenced tunes on their Late Night Love Affair single are both included here and sound as good now as the day I first heard them. Do the rest of the songs on Come An’ Get It reach the same pinnacle as Lip Service‘s first single? That is the question I am about to answer.

And the answer is…usually. “Cream” for example could be the best Lip Service song I’ve heard yet. It opens with a Cult influenced groove that is one of the most addicting rhythms I’ve heard since Salty Dog‘s “Come Along”. “Back To School” has a similar feel to Skid Row‘s “Piece Of Me” and is a strong rocker from start to finish while “Bang Bang” sounds like something Ace Frehley would have written. The remaining new tracks aren’t bad, but they don’t come close to touching the magic of the songs I’ve mentioned.

Vocalist Neil Fielding still sounds like a cross between Tom Keifer and Sebastian Bach, but it isn’t as pronounced this time around. Regardless of who he sounds like, there is no denying he has the perfect voice for this genre of music – and his bandmates are no slouches either! Like any sleaze band worth their weight in gold Lip Service has sex on the mind, from the lyrics right down to the sexy school girl on the front cover. What they also had on their mind was releasing a killer debut album, and they managed to do just that.