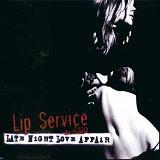 Review:
I get sent lots of CDs to review, some good and some bad. The real treat is when an up-and-coming band sends their music/press kit and it kicks your ass. The UK’s Lip Service is the latest band to impress the hell out of me.

Many of us have been waiting patiently for new music from Cinderella, but chances are if they release a CD it will further explore their blues-based leanings. For those that long for the early days of Cinderella, look no further than Lip Service. Vocalist Neil Fielding has a Tom Keifer fetish and is capable of ending each lyrical line with that throaty growl, while the rest of the band conjures up pre Night Songs era sounds.

Both of these tracks are five-star rockers, with “Late Night Love Affair” being the sleazier of the two. “Love Gone Done Me Bad” infuses a hint of 70s retro rock to the sleaze sound, not unlike what Backwash does, and is done to perfection. The guys are working on a full-length titled “Come An’ Get It”, and I for one can’t wait to ‘get it’. Lip Service is still raw and rough around the edges, but they are incredible – despite being named after a clothing company.