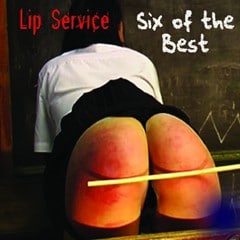 Review:
Three years ago a young and fresh UK band by the name of Lip Service impressed the hell out of me with their Cinderella influenced sleaze metal. If you’re wondering why such a promising group went into hiding the last few years, the answer is simple — the dreaded line-up change. Today, only singer/guitarist Neil Fielding remains from the band that kick-started their career with Come ‘An Get It. Instead of sitting in the studio for months, Lip Service decided to record a 6 song EP to showcase the new band members.

Despite all the personnel changes, musically the band are treading down a similar path. Fielding has surrounded himself with a new cast of musicians that understand what drives Lip Service — that being sleazy ’80s influenced hard rock drowned with lyrics about sex and drugs. They may be from the wrong time period, but the members of Lip Service are trying their damndest to bring the debauchery of the ’80s roaring into the current millennium.

The first three songs on this EP are each dripping with ample amounts of sleaze and attitude as Fielding once again has that Tom Keifer snarl down pat. However Lip Service is heavier and nastier than Cinderella ever was, taking their successful ’80s sound and smashing it through your speakers. Not to be outdone though are the new band cohorts who twist and turn like a whirlwind around every growl from the frontman. Just check out the simple yet effective work displayed on “Black ‘N’ Blue” and “Lowlife In High Heels”. “Bustin’ My Balls” showcases the rhythm section, a song that thumps along until it works its way under your skin. In fact that may be this band’s greatest gift — the ability to keep things simple yet entertaining at the same time. Wrapping up the entire affair is an out of character acoustic number called “Back To School Blues” that shows a different side to the latest incarnation of Lip Service.

Six Of The Best may not in fact be Lip Service‘s best work — I’m still partial to “Late Night Love Affair” and “Love Gone Done Me Bad” myself — but it definitely shows that the band is still on the right track. An upcoming live album should show the world what these young upstarts are really capable of. Until then, this EP does exactly what it was meant to — get the Lip Service name back out there and drive some attitude driven sleaze into your cranium at the same time.