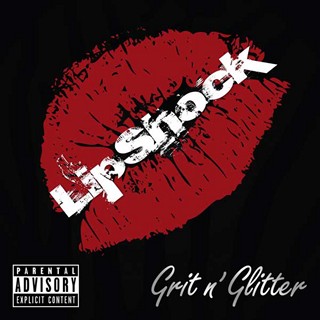 Review:
Hailing from the dried-up rock scene of Coventry, British glam outfit Lipshock prove there’s still life in the old dog yet — and their debut album Grit N’ Glitter is all the proof you need that if the scene was dead, it has just been totally reincarnated. This is a band that has had the pleasure of supporting the likes of Reckless Love, Pulled Apart By Horses, Voodoo Six, and soon they will add The Quireboys to that growing list of names.

With no intent to disappoint, energetic opener “Aim To Please (Shoot To Kill)” does exactly that — with gang vocals aplenty this track dishes out more surprises than a Steel Panther groupie, and its imperfect cadence teases listeners to rock the catchy chorus just once more. Adding even more fuel to the glam-rock fire, “Ignite” could carry a health warning as its speedy guitar riffs and anthemic vocal lines are laden with even more hooks than probably Dr. Hook himself. Speed and timing are most definitely the two secret ingredients that make up the rock n’ roll recipe of Lipshock.

The acoustic “Faith In Lies”, and the slower “Over & Out”, divert down the melodic route and its here where frontman Anthony ‘Peanut’ Marshall proves a dark horse, hitting vocal harmonies that soar with emotion — this is a frontman who is no stranger to a melody, that’s for sure. The sludgy guitar riffs attached to “Cryptic Bitch” and the baggy bass lines in the self-titled “Grit N’ Glitter” are just two small threads in the fabric of this intricately woven 12-track record.

Taking on British cock-rockers The Darkness, the vocal influences are clear in “Glamourize”, but its drummer and Guinness World Record holder Shaun ‘Woodsy’ Woods who takes the lead with this one — and it soon becomes clear why he co-holds the title for playing in sync, alongside 600 other drummers, and completing the largest drum fest ever! Killer track “Hey Gina” makes for a refreshing play on the genre and is the first departure from the cookie-cutter that is Lipshock. Each member brings something uniquely different to the table, which somehow espouses to make the perfect sound. Combining groovy bass lines with bluesy guitar licks, their familiar sound is quickly restored through a Velvet Revolver inspired solo.

Ending on a sheer high, “Feelin’ Right At Home” needs no introduction and it’s clear from the title how the band felt when choosing to end the CD on this hard, loud and heavy note. Nevertheless, far from being yet another gimmick-fuelled rock act, Lipshock are rooted in genuine talent and originality that treads an interesting line between the trashy glam-rock and the bluesy groove. Make no mistake, Grit N’ Glitter does what it says on the tin and achieves what it set out to do — which is Glamourize, Ignite and leave you feelin’ right at home… or better still, LIPSHOCKED!