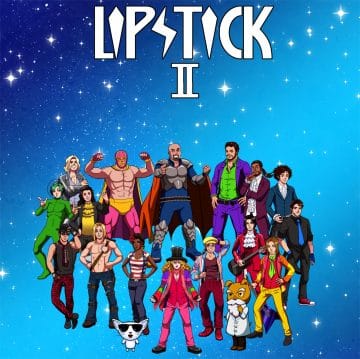 Review:
This is definitely the toughest review that I have done since I started writing album reviews. Why you may ask? Lipstick‘s frontman Greg Troyan has been semi-regularly contributing to Sleaze Roxx since I took over as editor back in early July 2015. In fact, Troyan contributed to Sleaze Roxx even prior to my first contribution to the site. Troyan has contributed some higher profile interviews such as with Tom Keifer (Cinderella) and Michael Monroe (Hanoi Rocks), provided the idea behind the second most read article on Sleaze Roxx since February 2016 (Top six replacements for AC/DC’s Brian Johnson) and provided some tips for articles that premiered first on Sleaze Roxx.

While Troyan may occasionally contribute to Sleaze Roxx, he is first and foremost a musician fronting his band Lipstick. Back in 2014, Lipstick released their debut self-titled album which had some catchy songs and at least one standout instrumental track (“The Flash”). Lipstick are very theatrical as you can tell from the very colourful almost clown like costumes worn by Troyan and fellow band member Stephen Smith, and they have a very silly mascot in their cat Mr. Cool. While I love the theatrics provided by artists such as Alice Cooper and KISS, the bubble gum theatrics provided by Lipstick are not my cup of tea. With Lipstick II, Troyan and Smith simply go over the top with everything from the cartoon cover, to the super long song title for track 14 (“Lipstick Encourages You To Have Fun At Our Shows But Not At The Expense Of Other Concertgoers”), to some of their kid like matters tackled in their songs (“Girl Dressed As Sailor Moon” and “Gotta Eat When You Can”), to the amount of guest musicians playing on the album.

There are really only a handful of good songs on Lipstick II. The first song “Fight Back” is the best by far. Built on a solid and catchy guitar riff, it seems it’s the only one that I really pine to hear on the whole album. Lipstick‘s answer to Quiet Riot‘s success with the Slade song “Cum On Feel The Noize” is the Japanese song “Cha La Head Cha La” which just falls short in so many ways and just really lacks punch. It does have a bit of Van Halen 5150 era feel to it with the guitar but the songs penned by Lipstick are way catchier. I am simply puzzled why Lipstick would choose that Japanese cover song as the first single and even shoot a video for it. “Stop” has an early Poison feel to it but by the end is really annoying with the band literally stopping the song each time they sing “Stop.” I suspect that the song might work well live but it’s simply annoying to listen to. “Fake Nerd Girl” had some potential with its punk like delivery, cool guitar riff and quick guitar solo but the verses with the “ooh ooh” part and towards the end, the two voices going on over each other at once, kill the song.

Where Lipstick II really loses me is on the song “Gotta Eat When You Can.” It’s actually one of the catchiest songs but the subject matter (“Gotta Eat When You Can”) with cheesy lyrics like “Peanut butter jelly / Get Inside my belly” coupled with one of the worst choruses (“Chomp Chomp Chomp” and repeat it sixteen times by my count) makes this an almost unbearable song. To put things into perspective for the not mathematically inclined, you will hear the word “Chomp” 48 times in a row during the chorus! I can imagine my three young kids perhaps enjoying the “Chomp Chomp Chomp” chorus portion but for a sleaze rock / metal music loving listener, it’s just painful stuff to hear. “You Can’t Stop The Rock” is one of the other decent songs on Lipstick II. The chorus is a bit repetitive but overall, the song rocks from start to finish. “Love Of Some Kind” is the only ballad on Lipstick II and unfortunately, Troyan‘s voice doesn’t carry the song by any stretch. If anything, it exposes Troyan‘s weaknesses as a singer.

“Rock N Roll Anime Girls” and “Electric Pussycat” are short and sweet. I prefer the latter out of the two. “Stop, Drop & Rock N Roll” will take you back to the ’50s or ’60s with a real retro boogie feel to it. It’s the kind of stuff that Joan Jett came up with early on in her solo career. “Teenage Girlfriend” has a catchy melody and chorus to it, and surprisingly is a highlight of the album. The track with the ill advised super long title “Lipstick Encourages You To Have Fun At Our Shows But Not At The Expense Of Other Concertgoers” actually works pretty well even with the accompanying trumpet for most of the song. Lipstick II ends with a Christmas song… which has an unnecessary dialogue portion between I believe Smith and Troyan at some point, and a rather weird ending where you might think that the band inserted a bonus song.

Overall, Lipstick II would have been so much better if Troyan and Smith just picked the best songs such as “Fight Back” and “You Can’t Stop The Rock”, and condensed the 15 track album into a six or seven song EP. I also won’t be characterizing Lipstick as “glam rock” anymore. I think they definitely have elements of “glam rock” but they are closer, especially with their lyrics, to “nerd rock” which is something that I am really not familiar with. At the end of the day, there is just way too much filler songs on Lipstick II. There you go. The one album review that I didn’t really want to do. Funny enough, I had previously told Troyan that I would send Lipstick II to another Sleaze Roxx writer for review but I decided at the end that would simply be a cop out on my part.