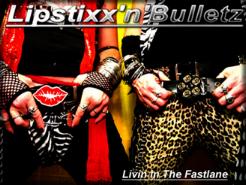 Review:
A lot of great bands have come out of Sweden in the last few years, sadly Lipstixx ‘N’ Bulletz isn’t one of them. I give the guys credit for reliving the glam look and sound in 2007 (right down to their silly moniker), but what the hell is going on with the vocals?

Actually the lead vocals aren’t horrible (although they aren’t great either) but what really gets annoying is that it seems like band member feels the need to grab the mic. One moment you will have a guy doing his best glam impression and then someone sounding like a power-metal crooner has to overlap, it becomes a sick mish-mash of sounds! The song “Fastlane” is completely ruined by this approach. It is so bad it’s almost laughable, like so many forgotten bands from the 80s that thought they could be superstars simply by stealing their mother’s clothing.

It’s kind of sad really, because musically Lipstixx ‘N’ Bulletz is alright, but I just can’t get past the vocals. There are a few killer screams on “In Vain”, too bad the band wouldn’t find someone who could sustain that throughout a song – either that or unplug everyone else’s microphone and let the main man handle everything. I just have to wonder if the band was so eager to test out their new recording equipment that they forgot to actually work on the music.