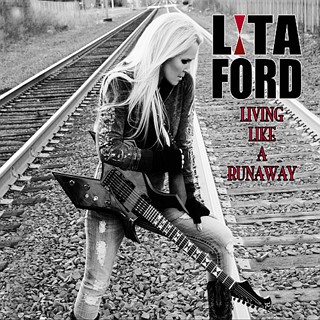 Review:
Blond bombshell Lita Ford launched her solo career in 1983 with Out For Blood, and prior to that she was known for her role as lead guitarist in the all girl group The Runaways. Ford dialed things up for her 1984 effort Dancin’ On The Edge, which earned critical acclaim and gave her major exposure, but it wasn’t until 1988 when she recorded the Lita album that things really came together. With Sharon Osbourne as her manager, RCA Records fully supporting the album, a number of co-writers that ranged from Nikki Sixx to Lemmy Kilmister to Ozzy Osbourne, and bubble-gum production from Mike Chapman — failure was not an option. With radio and video hits like “Close My Eyes Forever” and “Kiss Me Deadly”, Lita went platinum and quickly became the most successful album of Lita Ford‘s career. It seemed like she peaked when she issued lackluster records like 1990’s Stiletto and 1991’s Dangerous Curves, which followed the formula outlined by the Lita album… albeit in diluted form. Lita even showed signs of desperation to fit in with the times on her Black album, which had a distinct grungy influence — it didn’t work.

After several years of inactivity Lita Ford hit the comeback trail with her 2009 album Wicked Wonderland. Nothing could have prepared fans for the abomination that was Wicked Wonderland, as it didn’t sound like a Lita Ford record — it didn’t sound like Lita Ford period. Instead her comeback effort was an industrial rock influenced album that leap-frogged to the top of of several ‘worst rock albums of 2009’ lists. Needless to say it didn’t sell very well, she toured sparingly, and it wasn’t the comeback that she or fans had envisioned.

After sustaining serious damage to her career it was critical that Lita return with a solid rock album, or at least something that was more to the liking of her fan base. Ford recruited guitar-slinger Gary Hoey to help co-write and produce Living Like A Runaway — a fantastic move considering Hoey didn’t skim on the guitar solos and riffs. Living Like A Runaway isn’t going to be an album that will bring Lita the type of success she had back in 1988, but it will do damage control. Living Like A Runaway has a number of forgettable filler tracks, the worst offenders being “Love 2 Hate U”, “Asylum”, and the ill-advised cover of 58‘s “A Song to Slit Your Wrists By” (which has me reliving Wicked Wonderland) — but it also has several standouts including the killer rocker that opens the album “Branded”, the title track which is a poppy throwback to the Lita album, the very personal “Mother” which is quite touching and emotional, and “Devil In My Hand”, which could be the strongest track on the CD.

While Living Like A Runaway isn’t going to make you forget albums like Out For Blood or Lita, it will erase memories of the horrendous Wicked Wonderland. Let’s hope Lita Ford continues to right the ship.