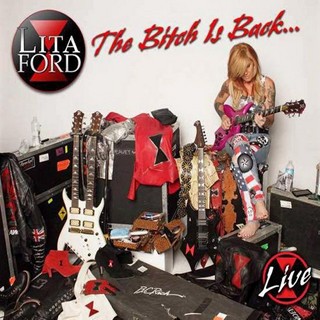 LITA FORD
THE BITCH IS BACK… LIVE
Released November 5, 2013 (Steamhammer/SPV)

Review:
The Bitch Is Back… Live — what a great title for a live album! Lita Ford is back with a new live album following her return to form and real comeback album, 2012’s well received Living Like A Runaway.

Thankfully for everyone, Ford realized the folly and misstep of her 2009 Wicked Wonderland CD, and accordingly, no songs from that disastrous album can be found on her latest live release — her third live effort despite having only released eight studio albums. The Bitch Is Back… Live is, not surprisingly, heavily focused on Ford‘s most recent studio album and her most successful album Lita since nine out of the twelve songs originate from those two albums. Any Lita Ford live album will, and should, of course include her two biggest hits, “Close My Eyes Forever” and “Kiss Me Deadly”. And the two additional cuts emanating from Lita, “Back To The Cave” and “Can’t Catch Me”, are no surprises. Your enjoyment of The Bitch Is Back… Live will likely come down to whether you like the five songs played from Living Like A Runaway and the rather low volume sound of the album.

The Bitch Is Back… Live kicks off with, presumably, Ford strolling on stage and quickly saying hello to what sounds like a handful of spectators before the band launches into “The Bitch Is Back”. As much as I like this live album the actual song, a cover of Elton John, is frankly a bit boring for a set opener and too poppy for my liking. Next up is “Hungry”, the only track from the 24 year span and four studio albums between 1988’s Lita and Living Like A Runaway. I find that the opening songs could have been played at a slightly faster pace and it is only when Ford and her band get to “Devil In My Head” (one of five cuts here representing her latest album) that the live CD really starts taking off for me. Other song highlights include “Can’t Catch Me”, apparently written with Motorhead‘s Lemmy over a few days of partying/hanging out, “Dancing On The Edge” and “Close My Eyes Forever”.

I am not crazy about the song choices on The Bitch Is Back… Live. I consider Ford‘s best album to be Dancin’ On The Edge and it is poorly represented here. Alas, the very nice booklet accompanying the album — highlighted by a great full body shot of Ford and photographs contributed by fans around the world (whom all get prominent photo credits in the booklet) — contains a setlist which shows the songs that were omitted from The Bitch Is Back… Live Among the two omitted songs is unfortunately one of my favorites — “Gotta Let Go” from Dancin’ On The Edge.

At the end of the day, while I am not fond about the overall setlist on The Bitch Is Back… Live, I am happy to have Lita Ford touring again and bringing her brand of rock ‘n’ roll to the masses. Given that Ford has not released a whole lot of material in the last 10 years, and that some of it has been quite dreadful (see Wicked Wonderland), I am more than happy with listening to The Bitch Is Back… Live until her next (hopefully good) studio album.