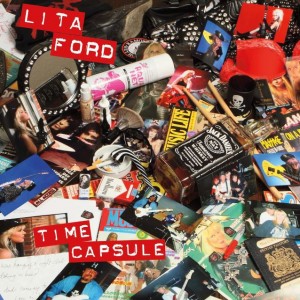 Review:
Lita Ford issued her most ‘classic’ sounding record in years with 2012’s Living Like A Runaway. While it wasn’t a ‘home run’, it was a return to form and got people excited again about her music again. After 2009’s horrific Wicked Wonderland and a well-publicized divorce; there was no other way to go but up.

Time Capsule opens up with ‘the’ most embarrassing and ridiculous intros I have probably heard — ever. Chris Holmes (ex-W.A.S.P.) plays a teenage Lita Ford’s verbally abusive father who rants and raves before we hear what is believed to be Lita squealing away in her dear old dad’s muscle car. That is followed by an extraordinary mediocre “Where Will I Find My Heart Tonight” which had me disinterested, already.

Things improved however with the clear standout and gem of Time Capsule: “Killing Kind.” The song features special appearances by Billy Sheehan on bass, Dave Navarro (on of all things mandolin) and signature background vocals by Cheap Trick’s Robin Zander and Rick Nielsen. “Killing Kind” has a melodic hook big enough to catch a whale. The ballad “War Of The Angels” isn’t too shabby either; it’s pure ‘vintage’ Lita Ford circa 1988. Lita’s rendition of Jimi Hendrix’s “Little Wing” is splendid and it’s featured in an instrumental form no less. Makes me wonder what an all instrumental Lita Ford record would sound like.

Other notable tracks are: “Rotten to the Core” where KISS’ Gene Simmons makes a special appearance playing bass, “Black Leather Heart” and “Anything For A Thrill.” Those three tracks along with “Killing Kind” and “War Of The Angels” would make welcome additions to Lita’s live set. I’m curious why Lita didn’t use her touring band on this album; they are ferocious live and would be brilliant on record — I’m sure of it. While Time Capsule won’t topple Lita’s classic back catalog, there’s enough here worthy of your time. You’ll just have to search for it.