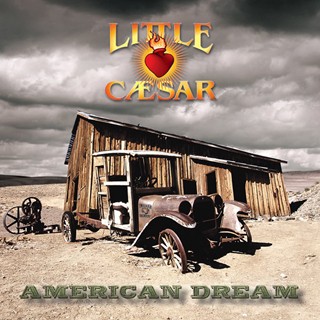 Review:
If you were to shake a Magic 8-Ball while asking if Ron Young could make anything sound good, that trusty childhood relic would reply ‘without a doubt’. No joke… I swear the Little Caesar frontman could take something as atrocious as Milli Vanilli or Culture Club and make it memorable. Thankfully Young doesn’t have to exert THAT much energy, as Little Caesar‘s original compositions have always risen to the upper echelons of hard rock.

Following their 2009 reunion album Redemption comes American Dream, the band’s fourth full-length studio effort, and it delivers exactly what one expects from a Little Caesar release — a heaping helping of hard rock, blues and soul. “Holy Roller” kicks things off, a song that could easily have found itself on 1992’s underrated Influence album, while “Prisoner Of Love” drips with soulful emotion. “Only A Memory Away” is arguably the best ballad Young has sung since Manic Eden‘s “Do Angels Die”, but things quickly speed up again with the rockabilly influenced “The Girl’s Rockin'”, a song that conjures up images of drive-ins and frilly skirts. It’s back to classic Little Caesar during “Is Your Crazy Gettin’ Lazy”, one of the album’s strongest tracks, and “Drama Queen”, that once again take the listener back to the early ’90s.

However it is the title track that really makes you take notice. The song is a poignant look at America today (and can be applied to many countries around the world) with lyrics like, “Don’t try to legislate morality, While you were piling up the casualties, Fear and consumption is your legacy, You’re fat and happy in your agony”. Its unapologetic honesty is sure to offend blind patriots — if Ted Nugent ever hears it his head will explode — but isn’t that the entire point? Longtime fans may think the subject matter of “American Dream” is too political for a band who has released gems such as “Down-N-Dirty”, but Little Caesar have never shied away from uncomfortable topics in the past (remember “Ballad Of Johnny”?).

It may be a bit macabre, but when Ron Young leaves this world someone should rip his throat out like the final scene of Patrick Swayze’s Roadhouse movie and place it in the Smithsonian — it is a national treasure. Little Caesar have always been about the music, and while they once had one of the most unique looks in ’80s rock, that was never the focal point. Because of that these seasoned veterans could never be washed away by changing musical trends like so many of their peers (they never really fit in with the norm to begin with). American Dream is yet another slab of honest and fulfilling hard rock — did you expect anything else from Ron Young and Little Caesar?