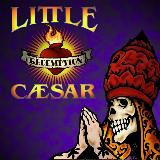 Review:
Talk about stepping into a time warp. Little Caesar always represented ‘substance over style’, which probably led to their commercial failure in the hair-spray fog of the late 80s, and with Redemption, the band’s first new material in 17 years, it sounds as if time has stood still over all these years. An endless stream of middle-aged musicians have returned in the last few years with dreams of recapturing the magic that they once (or never did) possessed, but few have managed to do it as well as Little Caesar. Of course few bands have a vocalist with the talent of Ron Young, whose bluesy and soulful voice always set this band at the top of the hard rock heap.

The only things missing from the current version of Little Caesar are guitarist Apache and the long flowing hair. The sound is practically identical to what they sounded like ages ago. They were never the heaviest band in town, and they still aren’t. What they are, and always have been, is a rhythm and blues rock band that writes quality songs.

Redemption kicks off with “Same Old Story”, a song previously found on the band’s odd-n-ends collection This Time It’s Different, and is a great way to ease into things. From there we get taken through a course of Little Caesar 101. “Supersonic” rolls right along before the soul starts pouring out on “Loving You Is Killing Me”. “Witness Stand” keeps things going with a steady and groovy guitar riff throughout before Ron Young shows how a ballad should be properly handled with “Redemption”, a song that has a Manic Eden feel to it. Next up is one of the best tracks on the CD, “Sick And Tired”, which finds the band at their heaviest followed closely by “Real Rock Drive” which stutters due to a lackluster chorus. The band shows their heartfelt side on two of the last three tracks, closing off this great release in fine fashion.

Little Caesar have always managed to set themselves apart from the crowd, and continue to do it today. The band decided to release Redemption on their own, apart from the pressures and influence of record companies. It is no longer about fame and fortune for the members of Little Caesar, it is simply about releasing quality music to the fans that remember them. We as fans should be thanking them for this release, and every other musician that once had teased-hair and tight pants should use Redemption as the blueprint for how a band should stage their comeback.