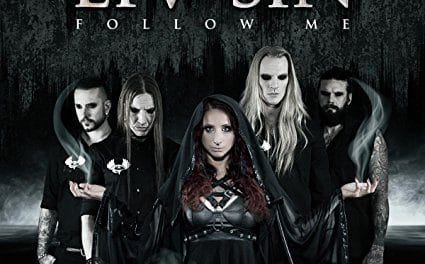 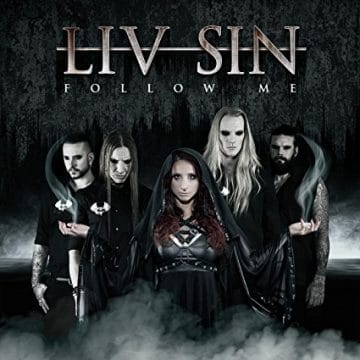 Review:
I was kind of torn. On one hand, I was rejoiced to hear that Liv Jagrell, the powerhouse singer of the now disbanded Sister Sin, would be continuing to play and create music after one of my favorite bands of all-time had called it quits. On the other hand, I was quite apprehensive at what Liv Sin would be coming up with given that she did not really participate in any of the songwriting in Sister Sin‘s 12+ years history and she was going to be exploring a different heavier musical direction than what Sister Sin had covered in the past. My early e-mail exchanges with Despotz Records representative Dave Tedder did nothing to reassure me given that the label deals with many different sounding acts and I believe the word “hardcore” was bandied around during one of our exchanges. Accordingly, it is definitely with some apprehensiveness and a little bit of trepidation that I pre-ordered Liv Sin‘s debut album Follow Me.

“Let Me Out” — Liv Sin‘s first single and video, which was released in advance of Follow Me — kind of reassured me that while the former Sister Sin frontwoman was adopting a slightly heavier sound and foregoing at least a little bit of the trademark Sister Sin melodies, her trademark vocals were still alive and well. The next “advance” single “Killing Ourselves To Live” which featured Destruction (whom I had never heard of before) singer Schmier was definitely heavier than what I was accustomed to from Jagrell and to be honest, I didn’t really care for until finally receiving my copy of Follow Me via Amazon. Liv Sin‘s cover of the Rob Halford led Fight‘s “Immortal Sin” was good but a bit puzzling given that it was a rather obscure song to cover from Halford‘s extensive song repertoire.

Right off the bat with the opening track “The Fall”, Jagrell lets the listener know that she is going in a heavier direction with Liv Sin than Sister Sin as the opening song is arguably heavier than anything that her former band has ever come up with. The opening verses and music in the next song “Hypocrite” remind me of some heavy Judas Priest (Halford era) song and I am really liking it even when it seems the song delves into more modern metal such as when Liv Sin is screaming “Inside.” I also do like the guitar harmonies towards the end of the song which is a departure from what Sister Sin could offer. The beginning melodies of “Let Me Out” could easily have been the remnants of an old Sister Sin song but than the slower verses kick in reminding me that Liv Sin is creating a new sound for herself. “Black Souls” sees Jagrell singing the way that she would have previously done in Sister Sin and really takes me back to that era of her musical career.

Although the musical style on Follow Me is definitely heavier with more modern overtones and less melodies than anything that Sister Sin had ever come up with, I find myself really enjoying the album. So much so that it really hasn’t left my CD player since obtaining it. Sure, a song like “Godless Utopia” is a bit cumbersome at times but it’s still good enough that I am not longing to skip it every time. As it turns out, my favorite tracks on Follow Me are buried deeper into the album. “Endless Roads” could have easily been found on Sister Sin‘s last album Black Lotus and that’s a great thing! “I’m Your Sin” is just a powerful mid-tempo heavy metal number from Liv Sin. The best track on Follow Me might just well be the album closer “The Beast Inside” which starts off quite slowly but builds and builds until the halfway mark when it reminds me of classic ’86 era Iron Maiden with the guitar melodies and keyboards (I think Maiden used the term “guitar synthesizers” for their Somewhere In Time album) to end the last minute and a half of the song.

Liv Sin‘s Follow Me is the surprise album of the year for me. I was not expecting myself to like it that much based on the first three songs that had been released in advance of the record but as it turns out, the best tracks and the ones that are the closest to what Sister Sin might have come up with are buried deep in the album. But then again, I should have known better. When you have such a great and distinctive voice like Liv Jagrell has, odds are just about anything you touch will sound pretty damn good. While I always considered Sister Sin as more of a sleaze rock type band (starting with Switchblade Serenades) that turned into more of a heavy metal band, there is no doubt that Liv Sin is heavy metal with some touches of modern metal at its finest.