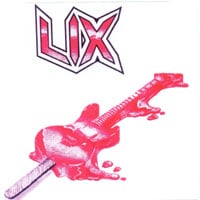 Review:
This is the only release by the talented 80’s quintet known as Lix. The sound is reminiscent of the big hair and glam sound of 80’s hard rock. Song such as “Out On The Street”, “On Hold” and “Want Me Love Me” really rock, as does the entire album!

This album was originally released in 1988 and then re-released on CD by the band some ten years later. Lix had the sound that should have made them household names back in the day, but it failed to happen for them. I give this record two thumbs up!