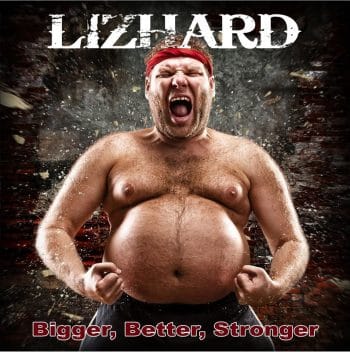 Review:
Italian sleaze rockers Lizhard are back with their second full length album, Bigger, Better, Stronger. The album has been co-produced, mixed and mastered by Alessandro Del Vecchio, a musician known worldwide for his collaborations with acts like Edge Of Forever, Moonstone Project, Glenn Hughes, Ian Paice, Jeff Scott Soto, Axe and many others.

On first listen, Bigger, Better, Stronger sounds like your typical set of modern guys interpreting the ’80s sound. And, for the most part, I’ve stuck with that opinion through several listens. For example, the album’s first cut, “Funkytown” starts like an Electric Boys‘ Funk-o-matic type tune, and stays true to that, with some nice wah pedal work and offset drumming.  Until the chorus, that is. Suddenly it becomes something wholly un-funky. Suddenly, I’m listening to a completely different song and choose to tune out until the next verse. Suddenly, I’m looking for the next track. “Downtown” gets my head going, which is always good, but it’s more melodic hard rock minus keyboards than outright sleaze. Conversely, “Rock n Roll Is Hard To Die” starts with a neat little electric blues riff. I can hear some real influence from Bonafide, or maybe Gotthard. Singer Mario Mosca in particular has a gravelly duet with Paul Shortino (Rough Cutt, Quiet Riot). It’s probably the best track on the album.

“Candyman” is a solid hard rocker, with a creative back end and active guitar work that is part jazzy, part dancy, and a catchy chorus. “Leave me Alone” is an odd combination of simple acoustic guitar and soft electrics. It’s a mid-tempo, light rock song designed to appeal to the masses. Good luck with that. Back to the hard rock, “Urban Cowboy” is a bit o’funk, and a bit o’ blues.  It is growing on me.

“Getting Tighter” is alright. Not much to talk about here, other than the fact it features guest Marco Mendoza on guitar (Dead Daises, Whitesnake, Lynch Mob, etc).  And, not being a particular fan of ballads, “Hard To Say Goodbye” and “All I Want Is You” do not both belong on what should be a rock album. At least “And Now…Take This” and “LizHard” bring everything full circle with sounds reminiscent of Judas Priest and Bonafide.

It’s been a quite a few months since I’ve had a band from Italy cross my desk. In the spring, it seemed like they were everywhere… Hell In The Club of course, as well as 17 Crash, Mastribes, Twisted, John Dallas and Hangarvain.  Lizhard’s Bigger, Better, Stronger, however, is the kind of album I hate reviewing.  It does not deserve to be trashed, because there are a few pretty good songs.  On the other hand, as a whole, it is not really good enough to get excited about. Below are a couple of videos, so decide for yourself and tell us what you think in the comments.

First video from the new Lizhard’s album “Bigger, Better, Stronger”. out now via Perris Records.Support the band, buy the CD at your favorite record store:Wo…

Lizhard are delighted to introduce Mario Mosca who, after an extensive search, will be the official new singer. We have listened to lots of demos, but when w…

Perris Records and Lizhard are pleased to announce the release of the new album electronic press kit. The EPK contains 30 seconds preview of each album song …