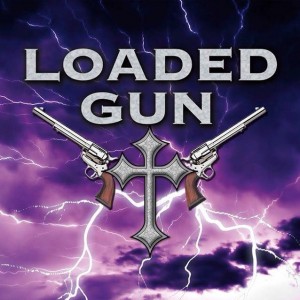 Review:
It’s alright but it doesn’t knock my socks off. Loaded Gun play a straight forward brand of ’80s influenced hard rock / heavy metal that is enjoyable to listen to but is kind of bland at the same time.

I’ve been wondering what’s missing from a lot of these songs because Loaded Gun have that ’80s guitar sound that I usually really like and the answer finally came to me, the songs are missing some really good hooks or melodies. The potential is certainly there with a lot of the songs but a lot of time, the tracks just seem to trudge along without maximizing their best elements. So many times, songs seem to have some spectacular parts that quickly get suppressed or underemphasized. It just seems that Loaded Gun are unable to come up with a really good song from start to finish. There are usually glimpses of brilliance on almost every track but whether the band capitalizes on that is just another question altogether. I am also not crazy about singer Ed Owens‘ vocal delivery which is limited range wise but certainly good enough to get the job done like on the opening track “Addicted.”

The best tracks on Loaded Gun‘s self-titled album are simply the ones where the group’s glimpses of brilliance come to the forefront for longer than others. A song such as “The Beast Inside” has a memorable chorus and a kick ass guitar solo but not much else. “Revolution” has a cool ’80s Scorpions style guitar riff and some strong verses upon which the song is built on before leading up to a rather disappointing chorus. The one track that stands out every time that I listen to Loaded Gun is “Slow Down” which has more melody, catchier guitar riffs and is more upbeat than most of the other songs on the album. Hands down, it is the best track on the record. My second favorite song on Loaded Gun is the slower moodier album closer “The System Has Failed” with its catchy chorus and constant beat throughout. The opening track “Addicted” is also pretty good.

I think that Loaded Gun have the potential to come up with something really special but the group’s songwriting has to be raised quite a few notches to get there. Perhaps the band just needs to enlist some outside writing help to assist in maximizing its potential strong points. Unfortunately, Loaded Gun‘s self-titled debut album is the kind of record that I usually won’t go back to once I am finished reviewing it. However, I am interested to see if the band members can come up with something better in the future.