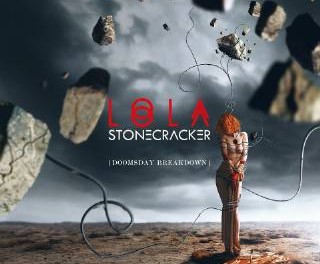 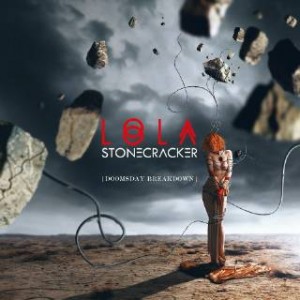 LOLA STONECRACKER
DOOMSDAY BREAKDOWN
Released May 4, 2015 (This is Core)

Review:
If I had to pick only one word to define Doomsday Breakdown, it would be “fun.” Loads of fun. I haven’t heard so much laughter on an album (diabolical or humourous) in… ever. These five guys from Italy are clearly enjoying themselves while playing some great rock and roll. Formed in 2009, Doomsday Breakdown is the band’s first full length recording.

Defining themselves as “post-grunge” is a bit of a misnomer, since every hard rock band influenced by ’80s music is a grunge survivor. I do hear Stone Temple Pilots, Velvet Revolver, Tesla, and other influences, but all in all, Lola Stonecracker are their own band. In 2011, Lola Stonecracker toured Europe with Faster Pussycat, hitting 13 countries. From 2011 to 2013, the band toured with Gilby Clarke (former Guns N’ Roses member), Reckless Love, Adler’s Appetite (with former Guns N’ Roses member Steven Adler) and John Corabi.

What’s great about this record? Many things. Lola Stonecracker are exploring good times with both the lyrics and musical compositions, and yet, there’s high quality musicianship throughout. The dual guitars are chunky and playful in parts, while the back end finds a groove and sticks to it. Singer Alex “Blacksmith” Fabbri has an interesting vocal style. I can hear hints of everyone from David Coverdale to the late Scott Weiland, but ultimately Fabbri creates his own identity.

Doomsday Breakdown kicks of with “Jigsaw” which has a seemingly bleeding attitude and Slash like riffs. “Generation On Surface”, “Jekyll And Hyde”, “MC Kenny’s Place” and “Space Cowboys” (goat noises — really?) are examples of a band having fun with their music. Toying with various guitar sounds and vocal deliveries, it makes this record active listening, not just background music. Any band willing to take on a cover of “Relax” by ’80s dance icon Frankie Goes to Hollywood, and do it well, is great in my books. “Shine” is the only real ballad and it’s alright if you’re into that sort of thing. There are two other mid-tempo tracks: “Secret For A Universe” would be at home on the new Def Leppard album and “All This Time” reminds me of Collective Soul.  “5 Perils of a Man from the Past”, “Doomsday Breakdown” and “Psycho Speed Paradise” are flat out rock n’ roll that every sleaze aficionado is looking for.

Lola Stonecracker are as fun as their name suggests. This is now yet another Italian band currently getting noticed by Sleaze Roxx, behind perennial favorite Hell in the Club, and others such as 17 Crash, Mastribes, Twisted, John Dallas and Hangarvain. There seems to be something in the water in Southern Europe these days. Doomsday Breakdown is available for streaming on Lola Stonecracker’s Reverbnation page.