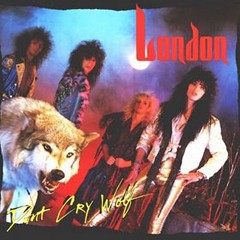 Review:
London returned with their second album in 1986, one year after their initial release Non-Stop Rock. If the band are to be believed, this album was ‘funded by some guy who went to jail who now wants his money back’ — as spoken in The Decline of Western Civilization Part 2: The Metal Years. They were talking about $100 grand of debt for this one, so surely it can only be better than Non-Stop Rock… right?

Correct. Though the production isn’t great, this is a right gem of an album, sitting in between the collection of demo songs that can be heard on 2008’s The Metal Years and the polished versions of those songs released on 1990’s Playa Del Rock. Nadir D’Priest‘s voice sounds great, the fret work done by Lizzie Grey is brilliant, and it sounds like a band that are clicking together and having fun. The only thing that I’ll add is that there are some sound effects in here and some keyboards in parts… but I’ll forgive them for that.

Don’t Cry Wolf starts off with “Drop The Bomb”, which I love — with the exception of the whine which doesn’t give it atmosphere, it simply annoys. However this song has a lot of low-end bass work and throbs along. “Set Me Free” is filler, but following that is a great little number called “Hit And Run Lover”. “Under The Gun” is a typical mid-eighties ‘metal’ song, complete with keyboards, and fits in nicely with anything you would hear around this time. A cover of The Beatles‘ “Oh Darling” starts off sounding really manky and then just degenerates into a really poor crooning number. This is the type of shit that you would hear getting sung by drunken people in a karaoke bar.

Survive that and you’ll reach “Fast As Light” which is simply tremendous, even with its whizzing keyboard effects. This track just pounds along with excellent bass and drums, some great riffs happening, and is completed by a typical Nadir scream. “Put Out The Fire” again continues the throbbing pounding vibe of the album, I just wish Lizzie‘s guitar work was louder. “Killing Time” is a song I want to hate — I really do — but it does sound dirty and that counts for a lot, your girlfriend may even like this one. Second from last is “We Want Everything”, another really good paced number, before the album concludes with the Blackie Lawless co-written ‘For Whom The Bell Tolls’, which for me, just sits out of place. It’s a good song, atmospheric and well performed, but I’m still pumped from “Fast As Light”, “Put Out The Fire” and ‘We Want Everything” and this song just sucks the energy out of you… it’s a big crash from the earlier numbers.

Still, Don’t Cry Wolf is a great album and as I’ve commented elsewhere London should have been huge — it is a shame they didn’t as these guys deserved it. Nadir D’Priest recently commented that he owns the copyright for this album and wants to re-master and re-release it — now that’s something to hope for!