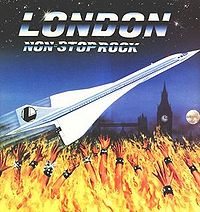 Review:
Ah London — the much and often maligned, sometimes deservedly so, black sheep of the 80’s Hollywood Sunset Strip sleaze metal scene. Their opening effort, Non-Stop Rock, is a typical 80’s low budget, poorly produced album containing some nice moments of fist pumping rock. This record, for me, once again reinforces everything that people have said about London, that they should have been huge but just didn’t seem to get there. Non-Stop Rock is the same, it should be good but everything just seems to fall that little bit short of the promise that it teases you with. Still it’s worth a listen just to hear the very definition of ‘should have been’,

“Dirty City” is a nice little opener, with a head-bobbing little riff/solo and a Nadir D’Priest scream within the first 10 seconds. The title track starts of well and has a fist pumping in the air vibe happening, but from there the CD starts to go off course.

“Werewolves In London” is a song I really want to like, but it’s just there and no more as it can’t seem to decide if it is a ballad or a chest beater. You can see what London had in mind on “It’s Rock N’ Roll”, name some cities and get the local crowds to cheer, but it ends up being bland and ultimately fails. “Stand Back” is just horrible as the chorus kills it and the solo is way too short, while I couldn’t even get past the first 20 seconds of “No Tell Motel”. This is one to avoid. “Party In Hollywood” has its moments, as the title tells you what this band is all about. “Masters Of The Airwaves” is the very definition of a song that tries too hard. It should be so much better, but it’s not. Wrapping up this album is “Radio Stars”, a song I want to dislike but really don’t. Its got a really cheesy riff, cheesy chorus and cheesy solo yet it all somehow works, even though it shouldn’t.

London showed a lot of promise on Non-Stop Rock, but overall it fails to deliver. The first two tracks are the best, and after that the rest is just filler… or worse!