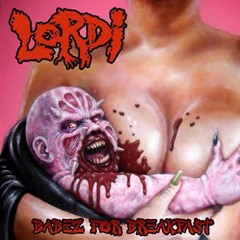 Review:
Let’s be up front on this one right from the start — Lordi isn’t for everyone. Lordi, much like the band they consider to be their greatest influence — KISS, tends to be an all or nothing proposal for most rock fans. Either you ‘get it’ and think they are brilliant, or you don’t ‘get it’ and think it’s a bunch of dudes (and a girl) in silly costumes singing silly songs with a singer that sounds awful. I fit squarely into the first category — I think Lordi is utterly and completely brilliant in every way.

The new CD from Finland’s Lordi, aptly titled Babez For Breakfast, is the fifth studio album from the band, following 2002’s Get Heavy, 2004’s The Monsterican Dream, 2006’s The Arockalypse, and 2008’s Deadache. The thing I like best about Lordi is that you know exactly what you are getting — the formula hasn’t changed on any of their five releases, and I hope it never does. The only thing that varies with Lordi is the occasional band member (most recently drummer Kita left to focus entirely on his glam rock outfit Stalla & SO) and the minor tweaks Mr. Lordi does to the band’s costumes for each release.

On Babez For Breakfast Lordi‘s primary influences (KISS and Alice Cooper) shine through clearly. The highlight of the CD for me is the brilliant first single “This Is Heavy Metal” — with a guitar riff that is a clear tribute to KISS‘ “War Machine” it’s clear that the band is saluting their idols. Each song offers something fun and very Lordi-esque, but my second and third favorite tracks from the album are the anthems “Rock Police” and “Granny’s Gone Crazy” — both are brilliant with sing-along songs that sound very similar to what Alice Cooper was sounding like during the Constrictor and Raise Your Fist And Yell years.

As I mentioned before, Lordi isn’t for everyone. Mr. Lordi‘s voice sounds like someone gurgling mouthwash and it took a while for it to grow on me — but it did, and while my wife (who’s a speech therapist) can’t get past the damage Mr. Lordi is doing to his vocal chords when he sings, I have long grown accustomed to the growl and the songwriting of this outstanding frontman. Mr. Lordi has repeated several times that KISS once said to go out and form the band you wanted to see live — and he did that. For those of us who ‘get it’ we couldn’t be happier with Babez For Breakfast. Here’s to hoping there are many more albums just like this one in the band’s future!