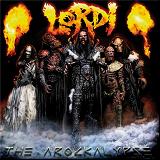 Review:
A lot of people have compared Finland’s Lordi with GWAR. Well, if we base that opinion plainly on their costumes, then that comparison is justified – but musically the two bands are worlds apart. Lordi are a great glam metal band in the vein of 80’s era of KISS, Alice Cooper and W.A.S.P.

The Arockalypse starts off with a ‘War Of The Worlds’ kind of intro where aliens have landed on Earth and started conquering. On this track we have a guest appearance by Twisted Sister‘s Dee Snider. Then, with a double bass pedal, Lordi kick straight into “Bringing Back The Balls To Rock” which is followed by “The Deadite Girl Gone Wild”. Next song, “The Kids Who Wanna Play With The Dead”, is another fist-pumping rock song. “It Snows In Hell” is Lordi‘s hit power ballad with the great guitar solo by legendary Bruce Kulick, in my opinion KISS‘ best guitar player.

The next two songs are their hit singles, “Who’s Your Daddy?” and “Hard Rock Hallelujah”, with the former being their most popular song to date. “Who’s Your Daddy?” is a hard rock song in the vein of 80’s hard rock, with Alice Cooper-esque lyrics. You all know “Hard Rock Hallelujah”, and you all have seen its video – basically the song ROCKS! But the song that won the Eurovision Song Contest in 2006 is just a single version, the album version is a minute or so longer, with a piano intro and a guitar solo being just some of the changes. Personally, I prefer the single version better.

“They Only Come Out At Night” has Udo Dirkschneider of Accept fame doing some vocal duties, while “The Chainsaw Buffet” has Jay Jay French of Twisted Sister playing some mean guitar. “Good To Be Bad”, “The Night Of The Loving Dead” and “Supermonstars (The Anthem Of The Phantoms)” all keep the same rocking tempo and sound good, with “The Chainsaw Buffet” being my favorite.

I would recommend The Arockalypse to every 80’s sleaze metal fan, but as well to the fans of harder-sounding modern rock and heavy metal. Also note that this album has several different editions (US, UK, Special, etc).