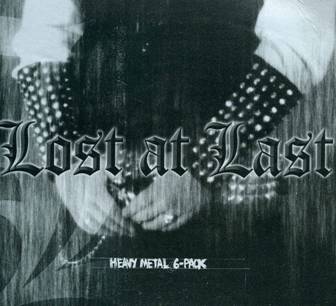 Review:
After reading the press release that accompanied this CD I was hesitant to play it. It turns out that Lost At Last isn’t as bad as I had originally imagined, but they are definitely hit and miss. One moment they come across as a Motorhead clone, and the next they simply scream way too much.

After the opening instrumental comes “Sucker”, a song that has a freight-train beat and an urgency that makes it work. The vocals are very gruff and abrasive, but not far enough over the edge to make them annoying. “Bastard” is the best song on Heavy Metal 6-Pack, it has a killer chorus and guitar solo that reminded me of Motorhead with an ear for melody. Sadly, things slowly go downhill from here.

You have to admire the band’s conviction on “Hey You” where they spout “you’re an asshole, cause you turned your back on heavy metal”. But the song itself suffers from a boring punk-rock vocal delivery – not the sound a song dedicated to metal should have. “Hand To Mouth” is much of the same, except with a better chorus.

Lost At Last is one of those groups that has to decide what musical avenue they want to pursue instead of spreading themselves too thin. Claiming to be “the world’s greatest heavy metal band” may be a bit of a stretch at the moment, but with a bit of work they can surely be a respected metal band. www.heavymetaltothebonebaby.com