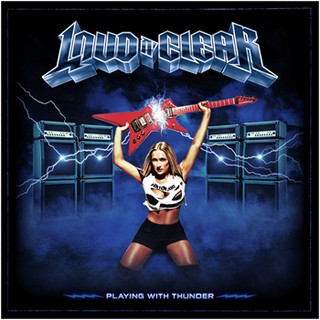 Review:
I get sent a lot of music, from all corners of the globe, but Loud N’ Clear may be the first submission from Israel. One doesn’t imagine the Middle East as being a haven for the debauchery of sleazy hard rock, yet that is exactly what this band performs. Regardless of their current location, Loud N’ Clear sound as if they were bred on Los Angeles’ Sunset Strip in the mid ’80s.

Playing With Thunder, the band’s debut, is an exercise in recreating the larger than life sounds and attitude of ’80s hair metal — and Loud N’ Clear do it well. You’ll envision flailing hair and outrageous stage antics when the crunchy guitar riff kicks off “New Solution”, which perfectly compliment Rikki Reckless‘ snarling vocals. The vocalist goes over-the-top on “Hold On”, often breaking during the higher registers, but I’ll be damned if the chorus doesn’t beg you to sing along. Throw in a blistering guitar solo by King Lizard‘s Niro Knox and “Hold On” quickly becomes the band’s shining moment — easily succeeding despite its occasional imperfections.

Lush harmonies take center stage during “Without You”, the closest thing to a love song appearing on Playing With Thunder, but the band shift back into overdrive for “Poison Love”, a song that has some cool moments but almost overstays its welcome. Wrapping up Playing With Fire is “Breathe”, which reminded me of Australia’s Hansel, and the XYZ influenced “Runaway” — which is due to the fact another vocalist takes center stage, from what I imagine was an earlier version of the group.

Loud N’ Clear have been slugging it out for a decade now, and it shows. In a day and age when wannabe musicians feel the need to release music the instant they form a band, these Israeli’s were paying their dues and maturing in the process. The religious zealots that often permeate new reports from the Middle East may not approve of Loud N’ Clear, but I’m sure the ‘Metal Messiah’ would be proud.

Reviewed by Skid for Sleaze Roxx, May 2013