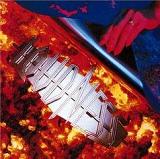 Review:
I first discovered Loudness when I saw the video for “Let It Go” on VH1 Classic one sleepless night. After finding some of their other music, I was hooked. I then discovered on YouTube that the Japanese version of “Let It Go” was, in my opinion, better (more screaming) than the American version, so I sought out the Japanese version of the album it was on. Shadows Of War was released in North America as Lightning Strikes with a shuffled track-list and different arrangements. I must say, this is one of my better purchases.

With four of the best musicians at their respective instruments, the album opens with a furious guitar solo by Akira Takasaki which leads into the mid-tempo, but intense, title track (which was called “Ashes In The Sky” in North America and appeared later on the album). With the exception of “Let It Go” — the band’s attempt at an FM friendly pop metal hit — the album does not let off the gas at all, filled with brilliantly crafted kick-in-the-face metal. “Shadows Of War,” “Who Knows (Time To Take A Stand),” and the fast and frantic “Black Star Oblivion” are the standout tracks, but all the songs are good; no filler on the album whatsoever.

Through his thick Japanese accent, and despite some lyrics that make it obvious that he doesn’t speak English very well, Minoru Niihara‘s vocals rival anyone in the States and Akira Takasaki‘s guitar work would make Eddie Van Halen cry. Masayoshi Yamashita on bass and Munetaka Higuchi behind the drum kit form one of the best rhythm sections in the genre, too.

The first Japanese band ever signed to an American record deal, Loudness really rocked hard and proud. It’s a shame they didn’t catch on here like they did in their native land.