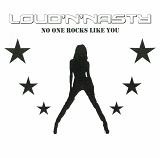 Review:
Sweden’s nastiest trio is back with a new drummer and three brand-new tracks. I’ve always thought Loud’N’Nasty were Ratt clones, but it doesn’t seem so pronounced this time around. Sure vocalist Rob Nasty has a rough and gritty voice not unlike that of Stephen Pearcy, and sure both bands play straight-up sleaze, but Loud’N’Nasty is more then just a clone band.

This short EP starts off with the fist-pumping anthem “No One Rocks Like You” and doesn’t let up. “Nasty Girls” is the best of the three, it is heavy and comes complete with screaming guitar solos, moaning girls and a chorus that I can’t quite understand. The final track, “You Make My World Go Round”, is as close as Loud’N’Nasty comes to a ballad, but really isn’t. It is a touch slower, but has way too many balls to be mixed up with some of the syrupy crap that dominated 80s rock radio.

No One Rocks Like You is essentially a teaser for what we can only hope will soon turn into a full-length release. Their minor line-up change hasn’t mellowed the band in the least and they continue to live up to their moniker.