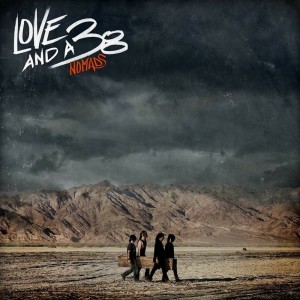 Review:
For whatever reason, I decided to read Love And A .38’s biography before listening to the actual album. I don’t usually do that because typically the longer and more flowery the prose, the worse the album is, so I had a bad feeling going into it. That’s been my experience, but I’m open to change.

As the band states, “Love And A .38 is a rock band and they’re truly very sorry about that. But the thing is… they have no other choice. Four guys from different parts of the country, who’s varied and shared experiences, triumphs and failures have brought them all to Los Angeles with that same conclusion.”

Hitting play on Love And A .38‘s album Nomads for the first time, it seems there might be something good to what they’re saying. The production is a little suspect as the drums sound flat and the guitars could be pumped up a bit. Never mind that though, this album is good. The first song on the album, and the first single is “Oh My God.” Starting with a military beat and a good stomp rhythm, the song produces. “Oh My God” is a very good representation of what this record is all about, so if you like this song, you’ll most likely enjoy the whole record. “Went Away” and “Not Comin’ Home” really sound like something Velvet Revolver would have made famous, with great guitars and fantastic vocals. “Big Leg Betty” is one of the songs that I said “Hey! Foo Fighters!”

Love And A .38‘s “Abre Los Ojos” — essentially, “Open Your Eyes” — is the closest thing to a ballad on Nomads – or in Love And A .38’s repertoire, period. To quote the band, “An intricate arrangement and a strong, hooky vocal line collide with the lyrics, which actually make it a bit of an anti-ballad.” I don’t know if I’d go that far, but it’s less a power ballad as it is a mid-tempo rock song like Pearl Jam was so good at.

The remainder of the album is not really notable for anything other than good hard rock. It’s not filler, but just kind of washed over me. This is not a record for new and innovative material, such as the new CDs by Reckless Love or Hell In The Club. There is no experimenting with sound or style. Love And A .38 produce straight out rock & roll and don’t vary from that. I do like this record. There’s lots to like and I suggest you check it out for yourself.

Official Music video for “Oh My God” by Love and a .38Off of the album “Nomads” – out February 19th 2016Directed by Corey HudsonAvailable on itunes: http://a…