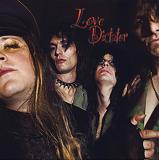 Review:
Germany’s Love Dictator is a little different than your average run of the mill new-wave sleaze band. They look like glam rockers, but there is nothing poppy or mainstream about these four guys. They named themselves after a line in a Zodiac Mindwarp song, so that should give you some insight into what they are trying to accomplish here.

Vocally Love Dictator reminds me of a cross between Motorhead and southern rockers Molly Hatchet, while the music itself has the punk influence of Motorhead meets the glam of Hanoi Rocks. Which I guess isn’t surprising considering part of the band came together at a Hanoi gig and even the song “Bourbon Lane” has a lot in common with Hanoi‘s cover of “Up Around The Bend”.

On two of the tracks Love Dictator treads too far into punk territory for my liking, but the band has so much energy (not to mention a killer vocal scream/growl) you can’t help but admire what they are trying to do. “Love Dictator”, the aforementioned “Bourbon Lane” and “The Sex Queen Of Rock’N’Roll” are all fine examples of pissed-off sleaze metal.

Love Dictator may be a bit raw at the moment (they’ve only been together since 2005), but these guys could evolve their band into something great. All the necessary ingredients are here, now they just have to streamline their sound. I look forward to hearing them again when they get some of the kinks worked out.