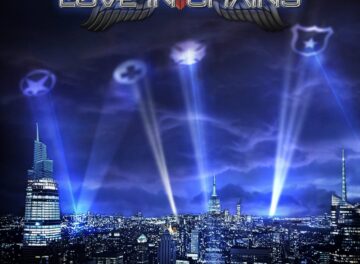 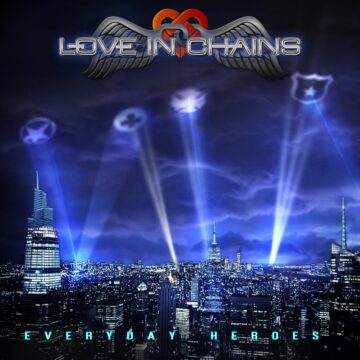 Review:
Love In Chains’ debut album Everyday Heroes pairs the talents of SteelCity guitarist Mike Floros and frontman Robert Kane, best known for his work with Apocalyptic Lovers. Floros has a number of albums and projects under his belt and has a sort of cult following and a reputation as a guy that has a strong work ethic. Kane’s reputation is much like Floros’ which earned him the respect of fans and critics alike. And his vocal abilities? They aren’t too shabby either. We should point out that Erik Johnson performed bass and drums on this record. His status as a member of the band is unknown. When musicians team up for a band/project, it’s hard to say how it will work out. On paper, it might look wonderful but the result could be far from it. Not everything hits the mark, so we’ll examine how the partnership between Floros and Kane measures up on Everyday Heroes.

Love In Chains launched the album earlier this year by issuing a video for the title track “Everyday Heroes.” That’s not even one of the better tunes on the album, in my opinion. I really enjoyed “Locked & Loaded,” “When Darkness Falls,” “Wildfire” and “Less Than Zero.” They’re blazing with killer riffage; catchy, melodic vocals; and, memorable choruses. “Rain” is another example of the better songs on this album, and again, the guitar work by Floros is stellar. I’m not as big of a fan of the ‘lighter’ stuff on the album. My favorite song on the record is “Less Than Zero.” I could have lived without the cover of KISS’ “Love Gun.” I don’t know what inspired the inclusion of that one on the album. It would have served the album best to keep that one off. I think Floros just needed another opportunity to flex those guitar chops!

Having followed Floros, I highly doubt that he’ll put SteelCity on hold to do Love In Chains. I don’t think that Kane will push Apocalyptic Lovers aside anytime soon. These two have another avenue to expand their creative energies and reach people that their other projects might have not reached. Love In Chains didn’t reinvent the wheel or do anything ‘groundbreaking’ on Everyday Heroes, but this record is an enjoyable listen. Highly recommended for those that are into melodic hard rock with a little more sophistication. In short, Everyday Heroes opens with the fiery “Locked & Loaded” and closes with “Wildfire.” There’s a lot of fire on this record!