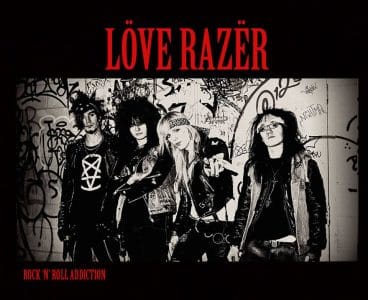 Review:
You only get one shot at making a first impression so it is wise to put your best foot forward whenever you can. Canadian sleaze rockers Löve Razër have done just that with their three song debut EP Rock ‘N’ Roll Addiction. Löve Razër‘s first album is not just one hell of a step forward, it’s one hell of a giant step forward into making a noticeable mark in the world of rock n’ roll.

If you like sleaze rock in the vein of the classic songs from L.A. Guns, Guns N’ Roses, Faster Pussycat and Mötley Crüe, not only are you going to like Löve Razër‘s debut EP, odds are you are going to love it just like I do. While Sleaze Roxx admittedly caters to more than just sleaze rock type bands, the reality is that sleaze type music is the bread and butter of the site and where Sleaze Roxx takes its roots from. It’s therefore such a treat and reassuring to see fantastic new bands such as Löve Razër take the sleaze rock baton and run with it.

No album can be perfect and the one knock on Löve Razër‘s Rock ‘N’ Roll Addiction EP is that there are only three songs and you get less than 11 minutes of music! By the time that I am truly excited and totally rocking out, it’s already all over. Kidding aside, Löve Razër offer three raw pedal to the metal sleaze rockers with their debut EP Rock ‘N’ Roll Addiction that will simply make you long for more of the same. The music and particularly singer Sydney Snow‘s vocals are raw, feel dirty and just exude sleaze all the way through. It just feels like every band member is at the top of their game in a nasty sort of way from Snow‘s raspy vocals to guitarist Micky Bonez‘s distinctive guitar tone to the fury of the backbeat from drummer Crissy Stixx and bassist Metal Mike.

The intro music to “First Class Bitch” reminds me a lot of the melodies and music on Last Call Messiahs‘ self-titled debut EP before Löve Razër put their own stamp on the song. “All Time Sleaze” borrows heavily from other bands including Guns N’ Roses and a few others that I am having a hard time putting my finger on. Whatever the case, the song rocks from start to finish with one scorching guitar solo from Bonez. The EP wraps up with “Turn It Up” which is based on a simple early Mötley Crüe like guitar riff and highlighted by lots of background vocals throughout the track. In a way, Löve Razër’s debut EP Rock ‘N’ Roll Addiction seems to be the missing album between Guns N’ Roses‘ raw debut EP Live ?!*@ Like a Suicide and their immensely popular multi-platinum seller Appetite For Destruction. Rock N Roll Addiction has the fury and sleaziness of Live ?!*@ Like a Suicide but more polish and better crafted songs yet its songs are not yet at the level of the tracks that can be found on Appetite For Destruction.

I have to give a big thank you to Sleaze Roxx writer Mark Hovarth for first bringing Löve Razër to my attention. The man simply has a knack for being one of the first to always find some of the best new sleaze rock bands out there. I’ll also point out that there really seems to be a big buzz about Löve Razër. Usually, when I post an article about a new band that has never been covered by Sleaze Roxx before, the amounts of page views can be pretty minimal and that’s even if the band itself promotes the article but the numbers for Sleaze Roxx’s inaugural article on Löve Razër were noticeably quite impressive. Löve Razër are definitely a band to watch out for.