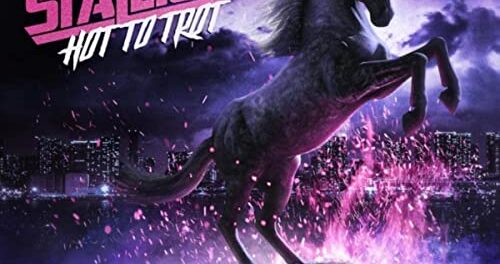 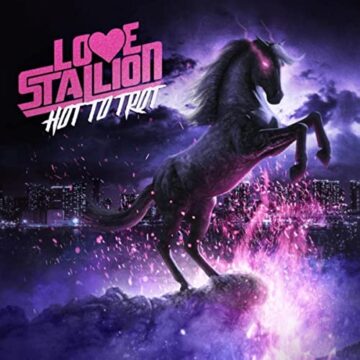 Review:
Given their name, you would be forgiven for lumping Denver based Love Stallion in the same breath as the likes of Steel Panther in lampooning the whole Sunset Strip era whilst maintaining a fine musical ability in their own right. This is of course more than slightly confirmed by the fact that they have supported Steel Panther on many shows and tours but, on the evidence of this follow up to 2018’s Unforgettable Ride, I felt and hoped that they may take it a little more seriously than their headlining cohorts.

“The Campaign” is an all-out rocking opener, complete with the requisite Sunset Strip style screams and whoops from vocalist Aaron Hart that delivers more than expected in style and promise. “Get Your Love” follows on in a similar vein with that Poison style joyful vibe, and “Dangerous Lover” adds a minor Warrant feel despite being slightly leaden in comparison. “Hot Town” is where the problems begin for me. Hart appears to struggle to reach the higher notes and the thin almost lacklustre  production doesn’t help matters at all and is a problem that will continue throughout most of the album. The ballad “Island Girl” is pleasant if fairly unmemorable, and both “Rock My Baby” and “Pump My Heart” attempt to recapture the spirit of the opening two songs but only succeed in blending into each other; and, once again the rather weedy production sadly hinders things further.

“Even The Devil Has Angels” reminded me ever so slightly of Tattoo Rodeo, with its faux Southern Rock style and adding some very nice backing harmonies, before launching into the radio ready “Highway 69” which is possibly the most immediate song on the album and only serves to further highlight the production problems evident in the middle of the album. The final track “Bareback Cowboy” is the only time I really felt that there was some genuine genre lampooning going on, but it does have a cool, nicely done spoken word extract and is fun in a lascivious, Bret Michaels solo album, kind of way.

The Love Stallion band members are great – Frankie Bones’ drums and Sabrina Winter’s bass are practically perfect throughout. Guitarist Tay Hamilton has a distinct C.C. DeVille thing going on which is obviously no mean comparison,  whilst Aaron Hart — aside from one or two range issues already mentioned — suits the songs perfectly and has echoes of Stevie Rachelle in both style and delivery.

The production lacks punch primarily in the middle section of the album and, even though the songs in that section aren’t perhaps the band’s strongest anyway, it definitely detracts from your full enjoyment of them. This is a shame because, on the whole, this is a great fun album that appears to have a genuine, sincere respect for a glam genre that is far too often ridiculed.