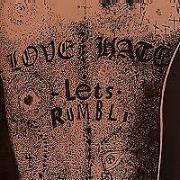 Review:
Love/Hate is one of those bands that was always on the brink of success and never seemed to break into the mainstream. Sure, some songs got air play like “Blackout In The Red Room” and “Don’t Fuck With Me.” But the band was not getting spun as frequently as say Bon Jovi or Guns N’Roses. But they did develop a solid fan base and continued to release albums, and to this day continue to tour.

Skid is the song writer of this band yet Jizzy Pearl is the lead singer. Jizzy‘s pipes are so impressive he has since been the front man of L.A. Guns for a few years in the late 90’s and currently is tearing it up as Ratt‘s front man and is even working with Steven Adler in a Guns N’Roses style band called Adler’s Appetite.

Let’s Rumble is the band’s third album following 1990’s Blackout In The Red Room and 1992’s Wasted In America. Those two albums, widely considered “hair metal” albums, are somewhat indicative of what this album is about. Yes, it is hair metal, but there just is something not quite right about this album. It’s missing something and I cannot put my finger on what.

Nevertheless, there are some pretty cool songs on this album, my personal favorite being “Spinning Wheel.” This song is clearly about a stripper and the lyrics aren’t vague by any means. But its rock ‘n’ roll, do they really have to be abstract? Other cool songs include “Let’s Rumble,” “Devil’s Squaw,” and “Sexical.”

As I said, something is missing from this album. The musicianship is solid and Jizzy sounds amazing as always but the album just seems somewhat flat at times, like somehow the band’s heart wasn’t in it. I could be completely wrong about this as I am just Joe Knucklehead from the street, but from my perspective it just isn’t Love/Hate‘s best effort. It’s good, but it’s not fantastic. I’d give it a 7 out of 10.