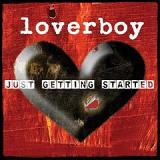 Review:
One of Canada’s most successful bands, Loverboy, are back in the saddle, and Mike Reno‘s voice sounds like it’s the early 80s all over again. This is 80s sounding enough to please us old fans stuck in a time warp musically, but Just Getting Started shouldn’t be dismissed because of that. Loverboy have updated their sound somewhat and deliver some catchy tunes that should appeal to a wider audience.

The title track hails back to classic Loverboy in the same vein as “Workin’ For The Weekend” or “The Kid Is Hot Tonite” and it sounds every bit as good as those two hits did. Next up is a slow number, “Fade To Black”, that has a great build up into a powerful chorus and which sets the pattern for this disc, that pattern being rocker-ballad-rocker-ballad and so on. Usually that annoys me because I just start rocking along and then next up you get a song that wants to make me fall asleep. But it works for Loverboy, the ballads aren’t slow and boring, they actually have some life, soul and guts to them. It’s seriously a major achievement on Loverboy‘s part for me to enjoy some of this laid-back ballad stuff, amongst their rockier songs, and I’m suddenly beginning to think maybe ballads aren’t so bad after all.

In saying that, “Back For More” is a number that is as sugary sappy sweet as Canadian maple syrup and vocally almost sounds like a boy band. I don’t dig this one much. “The One That Got Away” on the other hand is a superb power ballad. Probably one of the best ballads I’ve heard in years and you won’t hear me say that often. Emotional lyrics that actually don’t make me want drown myself in a bottle of wine (or two) and cry! The music is so good – very nice.

All the more upbeat songs are old-school Loverboy and great, but my favorite cut is “As Good As It Gets”. It starts off with a catchy riff and I know I’m going to like this one straight away, and I’m also liking the clever lyrics like ‘there you were at quarter past lost, like a movie stuck on pause’ and ‘even Shakespeare couldn’t write this script, its better than a page from Romeo and Juliet’. They can’t go wrong with this feel good foot tapping rocker.

Just Getting Started is a fairly safe radio-friendly release packed full of songs with hooks, melodies and catchy choruses. Some of this is a bit light for my taste but Loverboy were never really about really hard rock anyway.

Fans of AOR/melodic rock should be more than happy with this offering and ‘lovin’ every minute of it’, I know I was.