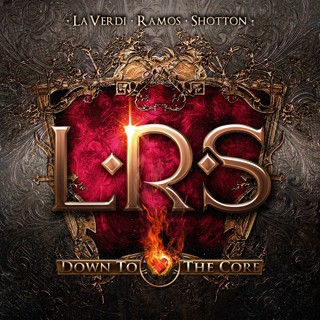 LRS
DOWN TO THE CORE
Released March 21, 2014 (Frontiers Records)

Review:
I was really looking forward to the return of Tommy La Verdi, the singer who fronted a fairly underrated band called 21 Guns in the early ’90s. Throw in a Hardline and Von Groove member and LRS (short for La Verdi, Ramos and Shotton) should have been spectacular — sadly it is anything but.

While 21 Guns was essentially an AOR band, they were nowhere near as limp-wristed as LRS. The difference between the two is the guitars — 21 Guns‘ debut was filled with killer riffs by Thin Lizzy‘s Scott Gorham while LRS‘ Josh Ramos is virtually invisible here. Getting through Down To The Core is a real challenge — if you can believe it, this album manages to make Journey sound like heavy metallers!

I’m surprised keyboardist and producer Alessandro Del Vecchio‘s name isn’t front and center here, because he was obviously a vital contributor to this train wreck. The keyboards are all too prominent and the production is so slick it strips away any spontaneity, resulting in a hard rock album in name only. An entire album filled with sleep-inducing songs is too much for me to endure, with the only shining moments being the title track and “Waiting For Love”. Meat Loaf may have said “2 out of 3 ain’t bad”, but “2 out of 12” sure as hell isn’t good.

Down To The Core is too safe, too boring and way too predictable — and definitely not the return of La Verdi I was hoping for. Having said that, the singer himself is in great form, it’s simply that the material he is working with is so bland even his pipes can’t save it. What may have saved this album is if Ramos was given more opportunities to show his skill and give the songs a little backbone — instead we are left with another supergroup that fails to deliver and all that remains is the type of easy-listening drivel you would hear on an elevator.