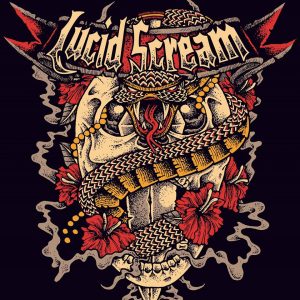 Review:
Before even hearing a note from this five-piece Canadian band, I was completely stoked. The cover art, logo and packaging is vintage heavy metal as is the back cover band photo with the members’ Iron Maiden t-shirts and leather jackets. They look like metal prodigies. Needless to say, upon my first though 200th spin of the album, I was not nor am I disappointed.

Lucid Scream have put together a very nice collection of five hard rock/metal songs that sound as if they were released in 1982. That is simply brilliant considering I wouldn’t think anyone in this band was even born yet. The EP is a six song endeavour but with an acoustic rendition of “Black Widow.” Both the electric and acoustic versions of that song are quite impressive and different enough to keep the listener engaged either by fist pumping with the electric version or I can certainly see the sea of cigarette lighters (now cell phones) in the pub/arena when these guys play the acoustic version of this one. The EP’s opener starts off at a break neck pace with the rocking “Speed Demon” and unfolds into four more metal tinged rockers that would fit right in with any Judas Priest loving Wacken festival attendee’s record collection. “Wanted Man” has a Maidenesque gallop and co-lead rhythm, while “All Or Nothin'” certainly maintains the hard rock influences but goes all “After The War” Gary Moore on us which is certainly a great feat.

Musicianship is quite prolific for these young men. Vocalist Eric Paulin wails like a seasoned banshee and is obviously well at home singing hard rock/heavy metal with tones of inflection and swagger that shines through all over this EP. The dual lead/rhythm assault of Shaddy Elsaghir and Chris LoNigro can easily be compared to the likes of K.K. Downing and Glenn Tipton or say Adrian Smith and Dave Murray. The kids have skills and based on the liner note credits, Elsaghir certainly has songwriting talent to spare. As with any solid hard rock/metal band, the bottom end needs to be held down with both hands and bassist Zach Mansfield and drummer Tyler Murzyn have the task handled proficiently and do supreme justice to every cut on the album.

According to Lucid Scream‘s Facebook page, they are currently engaged in putting together the next instalment in their epic journey into everyone’s stereo’s and I for one will snatch it up in a New York second. If what’s next is half as good as the heavily rotated (still) self-titled EP, I will be pleased as punch as should the rest of you.