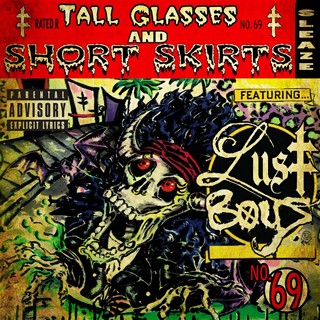 Production:
Produced by Christian Down and Lust Boys.

Review:
Hailing from Canada, Lust Boys, who have previously released two EPs named P.L.P.A. and Rock Bay Sessions, have put out their first full-length album entitled Tall Glasses And Short Skirts. The title of the album doesn’t mince words, nor do the songs and lyrics that make up this ten song collection of sex, rock and roll, and sex.

The album kicks off with a cowbell during “Whitetrash Superstar” and the lyrics ‘C’mon! Let me tell you a story about a little lady I know…’ sets the tone for the album and also showcases the vocals of Jayme Black. His voice has some Phil Lewis (L.A. Guns) and Tom Keifer (Cinderella) qualities, leading a rough and bluesy sound as he spews stories of partying, and you guessed it… sex with hot women. The second track, “Black Lightning”, is heavy on the guitar riffs and one of the harder tracks on this album while “Moment Of Madness” begins with some talking and then the words ‘I don’t wanna wake up today, I’ve got nowhere to go… except CRAZY!’ This is a band made for bored suburban youth looking to rebel (and have lots of sex). I’m pretty sure in the late eighties I would have loved this band and had their poster next to Motley Crue and David Lee Roth.

“This Love” is either a hit or miss, and after a few listens I’m still not sure. Again, I don’t think these songs are to be taken too seriously, but this one just doesn’t really hit me like the first few. I was excited to see a track named “Public Washroom”, hoping for a sequel of sorts to Faster Pussycat‘s “Bathroom Wall”, and I wasn’t disappointed. The song is (predictably) about having sex in a public bathroom and contains the chorus of, ‘I met my girl in the public washroom, don’t ask me why we were both there.’ “Born To Lose Blues” is a bit of a change-up that may be welcomed or not (for me not so much) but the closing track “Leather N’ Boots” is one of the strongest songs — and although I love having this at the end, I wonder why it was buried as track number ten.

There are several great songs on this album, and as you would expect from a band named Lust Boys the content is raw and the message is debauchery in its highest form. Tall Glasses And Short Skirts is a rebellious soundtrack for anyone who loves their sleaze rock heavy on the party side and light on political viewpoints.