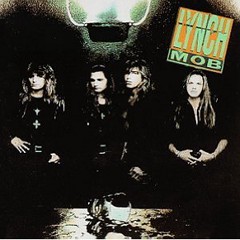 Review:
Lynch Mob was the second release, and self-titled effort, from the band of the same name. Formed in 1989 by guitar virtuoso George Lynch after his departure from Dokken, this version of Lynch Mob featured the now legendary Robert Mason (Big Cock, Cry Of Love and currently carrying Warrant to their best performances in years) on vocals and, quite simply, this album is the best thing Lynch Mob ever did.

I’m a huge George Lynch fan, so his own band done with his own style, signature riffing and sung by the ‘BMF’ was always going to work. Sure Oni Logan did a good job on Lynch Mob‘s debut Wicked Sensation, and an even better job on last year’s Smoke And Mirrors, but this just smacks those albums around. This record was stigmatized by poor sales and the unfortunate timing, as grunge was riding a crest at that time, an unstoppable wave. If Lynch Mob had been released a few years earlier it would have been huge because it has so many classic sleazy riffs, incredible vocals and, quite frankly, if your good lady doesn’t look at you with a twinkle in her eye then you’re not playing it loud enough. Let’s have a look at this little gem shall we…

“Jungle Of Love” starts us off, and think about it carefully, “Let me sing between about the things, you’ve been swinging”… yes, Robert. Next, oh yes ladies, is “Tangled In The Web” — trust me guys, put this one on when amore is in the air… I’ve seen this song make the ladies’ knees tremble. Mason‘s vocals are first class on this and Lynch‘s guitar solo just brings this one alive. “No Good” continues us along this musical ride and is a solid enough number followed by “Dream Until Tomorrow”, a slower tune to calm things down and is the staple ballad that you would expect on an album like this, with the vocals again being the highlight. “Cold Is The Heart” begins to speed things up and has a really dirty feel to it as it oozes along. “Tie Your Mother Down” is a clear cover of Queen, and though similar sounding, Mason‘s vocals are again fabulous on this, putting his own rock n’ roll stamp all over it. “Heaven Is Waiting” follows, and again is an absolute classic as everything works on this track. “I Want It” thunders along, taking the energy of the album along further and faster, and is another total stand-out. “When Darkness Calls” is the second to last track, and from the word go it is simply a dirty and nasty slice of sleaze. It’s also different from the other tracks in that it is half vocals and half guitar work — Lynch shows some of his chops here and his distinctive style just blisters out of the speakers. “The Secret” is last up and closes the album off nicely.

What can I say? Lynch Mob is truly a gem of an album, musically it is as good as anything you’ll hear from around this time period — plus it has Robert Mason and George Lynch! There is a serious amount of goodness on this album, with three outstanding tracks in “Tangled In The Web”, “Heaven Is Waiting” and “When Darkness Calls”. As usual, beg, borrow or steal to get this CD as it is highly recommended.