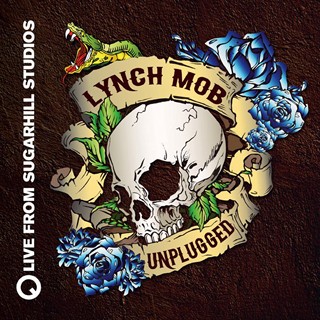 Review:
The off and on working relationship between guitarist George Lynch and singer Oni Logan is currently back on again. This time around Lynch Mob recorded four live songs at Texas’ Sugarhill Studios for an EP generically titled Unplugged.

For those keeping track, the last time ‘Mr. Scary’ went unplugged was on Dokken‘s One Live Night, which wasn’t very ‘lively’ and wasn’t very ‘unplugged’ either as Lynch was plugged in for most of that recording. This time around Lynch is completely unplugged and he tears it up on the acoustic guitar, which I found to be very refreshing. I was pleasantly surprised at how the Lynch Mob classics “River Of Love”, “All I Want” and “Wicked Sensation” from the band’s Wicked Sensation debut lent themselves to the acoustic treatment. Oni Logan sounds incredibly good on this recording and still has the charisma that caught Lynch‘s ear and led to him stealing the singer from Cold Sweat many years ago. The track “Where Do You Sleep At Night”, from the band’s comeback album Smoke And Mirrors, is good but there are much better tracks on that album — this is just filler.

In addition to Lynch and Logan ‘The Mob’ is rounded out by former Ratt bassist Robbie Crane and Brian Tichy, who is a drummer by trade but plays rhythm guitar on this recording. As a ‘bonus’ to close out the disc there’s a ‘Zookeeper’ type interview with the guys in the band — but it’s not much of a bonus I’m afraid. Overall this EP is a good tide-over while we await Lynch Mob‘s demise once again, before they reform for another album.