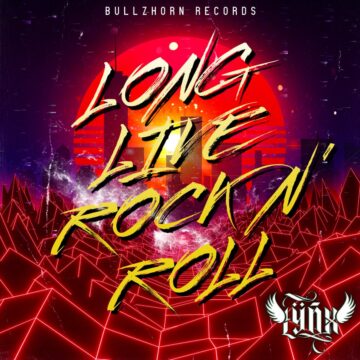 Review:
You’ve got to hand it to Canadian rockers Lÿnx. The group only formed back in 2020 but the band already has two EPs under its belt and both were released in 2021. It seems that Lÿnx have improved quite a bit from their difficult to listen to debut self-titled EP to their latest EP Long Live Rock N’ Roll. At first, I thought that Lÿnx‘s latest EP was mainly a covers one with recognizable song titles such as Rainbow‘s “Long Live Rock N’ Roll” and Black Sabbath‘s “Paranoid” along with more obscure titles such as Anvil‘s “Forged In Fire.” As it turns out, I was partially right since Lÿnx did elect to cover Black Sabbath‘s classic track “Paranoid” but the rest of the tracks are all original compositions from the band.

I use the term “original” loosely since the intro guitar riff to the opening track “Long Live Rock N’ Roll” reminds me a lot of Iron Maiden‘s “2 Minutes to Midnight” while the opening guitar riff to “Irresistible” is a rip off from Mountain‘s sublime “Mississippi Queen.” Aside from those faux pas, Lÿnx‘s Long Live Rock N’ Roll EP is an enjoyable album with a lot of energy and it displays some untapped potential that if harnessed correctly, could result in a great album from these Western Canadian rockers. Unfortunately, we are not at the “great” stage yet with Long Live Rock N’ Roll but the potential is there for something bigger and better, and especially when you consider the band’s debut self-titled EP.

Interestingly enough, Lÿnx have made a switch in lead vocalist since Jagur (the only member to use his real name) has replaced Lazer Wild since the release of the EP Long Live Rock N’ Roll. That is a shame for me since I really liked Lazer Wild‘s voice on Long Live Rock N’ Roll. Perhaps Jagur‘s arrival in the band will be like when Bruce Dickinson took over for Paul Di’Anno after Iron Maiden had already released two albums. Time will tell but these Canadian rockers still have a lot to prove aside from their ability to release a lot of material in a relatively short time since first forming. There is a real raw energy on Long Live Rock N’ Roll that really needs to be harnessed properly. A good example of that is the second track “Irresistible” which has some good parts but doesn’t seem to flow that nicely. Lÿnx seem to still be developing their musical style as the next track “Crazy Crazy World” has a bit of a punk attitude to it and some Justin Hawkins (of The Darkness) type high pitched vocals.

“Red Rocket” features some cool guitar solos from Blade and is a more straight ahead rocker for a band that likes to complicate things even when it’s not necessary to do so. “Forged In Fire” is probably the best track on Long Live Rock N’ Roll with the band slowing things down and letting Lazer Wild sing rather than scream. It would be nice to have more songs in this direction and I assume that the Lÿnx band members are still trying to figure out exactly what musical direction that they should really pursue. The EP closes with a spirited version of Black Sabbath‘s classic “Paranoid.” I am not sure what prompted the Lÿnx band members to cover this song but they did a good job.

Overall, I now see a lot of potential for Lÿnx if they can figure out what they do best and strip things down a little bit rather than cram too many ideas into one song. Anytime a group changes its lead vocalist, it can lead to quite a different sound so it will be interesting to see what Jagur brings to the table and whether Lÿnx can get to that next level with their new singer.