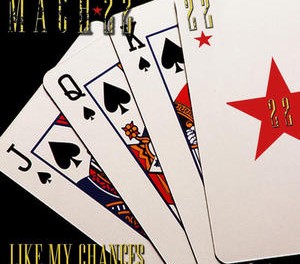 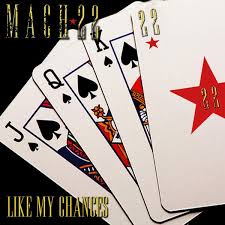 Review:
Mach22 have called their sophomore EP Like My Chances. I like their chances too because quite simply, Like My Chances is a phenomenal record. The Philadelphia based band proves that playing uncomplicated classic rock and roll with a whole lot of soul is an art that many attempt but few are able to master. And master this art, Mach22 certainly accomplish on Like My Chances!

Man, where do you start? This is such a good record. It is a shame that there are only six songs. Since opening the package to the rather small no frills EP Like My Chances, I have played it at least six or seven times in a row. Although I had previously heard a song here and there from Mach22, I only first really became familiar with the Philly rockers when they closed the M3 Pre Party in Columbia, Maryland about two months ago. Impressed with what I heard, I made a mental note to purchase their music once back in Canada. Prior to Like My Chances being released, the band released snippets of the song “Still Standing” and I really liked what I heard. Hearing the song in its entirety as the opening track only makes me appreciate the song even more. There is nothing complicated about it. Some great guitar riffs and solos, a strong rhythm section and some amazing vocals from singer Lamont Caldwell demonstrate that playing a kick ass tune does not have to be complicated.

Caldwell must be the long lost son of Living Colour‘s frontman Corey Glover because he has that same amazing soulful voice where you hang on whatever he sings. While Caldwell may well have no relation to Glover, the one guy in Mach22 who has some serious musical genes is guitarist Sebastian Labar who is the son of Cinderella‘s axeman Jeff Labar. Just like his father with his guitar skills, the younger Labar‘s playing is tasteful, melodic and rocking without being over the top. The second track “Like My Chances” has this great vibe and boogie to it built on a great guitar riff and Caldwell‘s soulful vocals. I love how the ending of the song includes some risky “Doo Doo Doo Doo Doo Do De Do De Do” singing but it works very well. Although the beginning of “Get Ready” starts off a little weak, the chorus is quite infectious and the one track that I vividly remember Mach22 playing at the M3 Pre Party a couple of month ago. “Snake Dance” is another great track that never lets up.

The verses during “Another Day” is when Caldwell really sounds like Glover to my ears. If someone had told me that Glover was singing that song, I would not bat one eyelash. As seems to be the case on just about every song, Labar delivers another scorching guitar solo. You can also really hear the driving rhythm section of bassist Jaron Gulino and drummer Damian Montecarlo on that one. “Less Than Perfect” closes the EP with a moody bluesy rocker which reminds me of a slower Tesla song with the guitar melody and Caldwell‘s bluesy singing.

Simply put, all of the songs on Mach22‘s sophomore EP Like My Chances are very good and reassures me that soulful classic rock and roll is alive and well! The great thing about Mach22‘s songs on Like My Chances is that they rock yet have enough cross appeal to be played on rock radio stations. After hearing Like My Chances a couple of times, I was able to succinctly describe what I thought of it in three words: “I love it!”.

Production:
Recorded with Joe Deluca
Mixed and mastered by Chris “The Wizard’ Collier