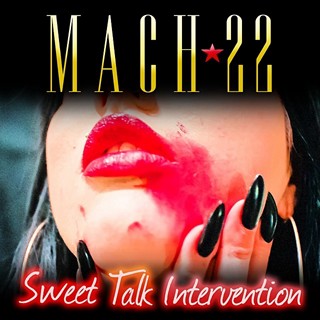 Review:
Mach22 is a fresh new band hailing from Philadelphia, Pennsylvania. Even though the group is very young, the members have already gained significant experience over the years.

Founder and frontman Lamont Caldwell used to play saxophone and handle background vocals while touring with such diverse acts as Jay-Z, the Dave Matthews Band and Erykah Badu. Drummer Damian MonteCarlo used to play guitar in Juliet’s Vice, a band that supported several well know ’80s metal bands. Bassist Jaron Gulino released an album with a thrash band while guitarist Ted Merrill has shared the stage with Dizzy Reed and was voted a finalist in Alterbridge‘s Mark Tremonti guitar shred contest. Last but not least, we have guitarist Sebastian LaBar — who’s last name may ring a bell. He is the son of Cinderella shredder Jeff LaBar, and was trained in the craft of guitar by his father from an early age.

Clearly, even though Mach22 are a relatively fresh and young outfit, all the members have their share of musical experience. Together, as a band, they gained some credit by playing to 75k people at Jay-Z‘s ‘Made In America Festival’ and were chosen by Slash as the winner in Guitar Center’s Onstage with Slash contest. Not many upstarts can boast such credentials.

Ok, so Mach22 have a very impressive resume for their age, but does their debut album Sweet Talk Intervention live up to their collective experience? Can the music do the talking? The answer is yes, if you like good hard rock with some bluesy and soulful twists.

The sound on Sweet Talk Intervention is very guitar driven, but not all the same all the time. The majority of the songs bear a very close resemblance in musical style to the ones on the legendary Appetite For Destruction album. Songs like “Made To Love”, “Nevermind” (thankfully not a Nirvana cover), and “Constant Denier” have a very similar sound to the 1987 Guns N’ Roses classic, while “I’m The Man” could easily have fit on Velvet Revolver‘s debut release. The guitar solos are very Slash influenced, and this might be why the legendary guitarist found Mach22 interesting enough to take them on board as a supporting act.

What stands up on this record, and really sets it apart from the other great releases of 2014, are the vocals. As mentioned above, Caldwell has a very rich musical background. His voice is very soulful, and even though he doesn’t hesitate to scream when needed, his delivery is much smoother and funk influenced than that of your average hard rock vocalist. He even reminds me a bit of Living Colour‘s Corey Glover at times. His vocal performance makes this release really unique, and with a very solid hard rock background this album left a lasting impression. Mach22 is one of the bands that, if they manage to stay together and consequently move in this chosen direction, could make a mark. And even if they implode, which would be a shame, I’m sure Caldwell would fit well in a possible Velvet Revolver reconstruction.

All in all, Sweet Talk Intervention is really worth getting — not only do you get a very good hard rock effort, but you’ll also hear something different to anything you might have listened to recently. This album is highly recommended to any rock fan eager to hear his favorite style of music crafted with a diverse and peculiar twist.

Reviewed by Fat Peter for Sleaze Roxx, May 2014