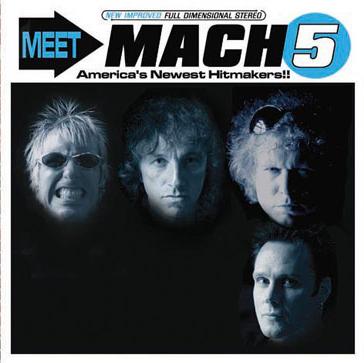 Review:
This is why I like Mach Bell. He seems to be off his rocker, he has been around for years and he has the type of voice that sounds like his diet has consisted of whiskey and filter-less cigarettes. The artwork has a real retro feel and the music itself is a step back in time to the days of seventies garage rock.

When the Thundertrain reunion was finished Mach Bell (likely best remembered for his work with the Joe Perry Project) set out on a mission to create the “most rockingest” Boston-based group around…Mach 5 is the result of that mission. Together the new band recorded Meet Mach 5 that clocks in at just under thirty minutes of punk inspired aggressive garage rock, full of energy and fun.

I got a kick out of hearing a rough rock version of Tracey Ullman‘s top 10 bubblegum pop hit “They Don’t Know” and the boys completely nail Alice Cooper‘s “Under My Wheels” – which isn’t surprising considering this entire release is like a super-charged version of early Cooper Motor City metal. As for the original material, “Get It Up” and “Through To You” are cool straight-ahead rockers. “25 Hours A Day” has a Rolling Stones swagger about it and “Quincy Girl” captures the pissed-off attitude of the punks.

The songs on Meet Mach 5 are short, in your face and to the point – nothing fancy or slick is to be found. Just like the formative years of hard rock, Mach 5 has left the dirt and grime (and even encourage it) in an effort to capture the raw energy of the music…and it works. www.thundertrain.com/mach5.