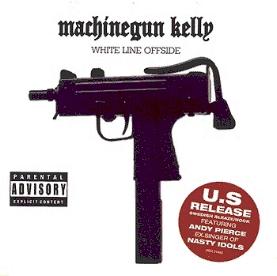 Review:
It is no secret that I was never a Guns N’Roses fan, for the simple fact that I just couldn’t get into Axl‘s vocal delivery. So at first White Line Offside came across as a Guns N’Roses album with a more accessible singer, but as you get further into the album it drifts into Shotgun Messiah territory. Which really isn’t surprising considering both bands hailed from Sweden, with Machinegun Kelly forming from the ashes of Nasty Idols.

Things start off on a sleazy note with the unrelenting “Hell Suicide”, an L.A. Guns type number. Up next is the G N’R sounding “White Line Offside,” complete with a lower register Axl Rose growl (minus the annoying whine) – in fact “Wild Sodom” is more of the same (although with the accent it sound like they are singing about “white soda”!). “Sister Sin” is a fun rocker that mixes Shotgun Messiah with Spread Eagle and would make the best choice for a single with its addictive chorus. “Bullshit City” is a darker number while “Kick That habit” is an adrenaline charged tune. “Psycho Kid” even reminds me of Johnny Crash‘s “Hey Kid”!

Originally released in 1995, White Line Offside is an excellent sleazy release for Perris Records to reissue – complete with new artwork created by vocalist Andy Pierce, although I can’t figure out why “Rosalie” from the original release was left of this version. Regardless, fans of raw dirty metal will enjoy Machinegun Kelly.