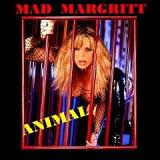 Review:
When I think of Mad Margritt I always wonder why their sexy cover art for Cold Sweat never got banned and Bon Jovi‘s Slippery When Wet did? But of course Cold Sweat came out in 1997 and obviously things were a bit less conservative than in 1986. Anyway, onto Mad Margritt‘s latest release Animal, this has a heavier feel and sound to it than their previous recordings. I was a little disappointed that there were only seven full-length songs on Animal, but the songs themselves are anything but disappointing.

“Extreme Osculation” makes for an interesting instrumental first track which, and I’m taking a wild guess here, would be more aptly named ‘Extreme Orgasm’ – but maybe it’s my less than pure imagination and I’ve got it wrong. Either way it’s a very pleasant little 32 second opener.

“Ruling Me” is, and although it isn’t very rock ‘n’ roll to use the word ‘pretty’, this song is just that, a pretty melodic kind of number but with a bit more punch than the typical cheese-ball ballad. “I Don’t Think I Love You” is an infectious outstanding rocker as is “Don’t Say a Word”. Catchy stuff indeed, with smooth strong backing vocals. But the track “Loaded Gun” is undoubtedly the bands finest hour, aggressive with big hooks and a nice sleazy sound.

If you liked their album New Sensation (lets conveniently forget the weak cover of AC/DC‘s “TNT” that appeared on it) and if you like bands like Parlor Trixx and early Warrant – singer Eddie Smith sounds a bit like Jani Lane to my ear – you should be more than satisfied with Animal. This is Mad Margritt‘s best release to date, a great sounding straight-forward rock album that would have been right at home in the music scene of 1989.