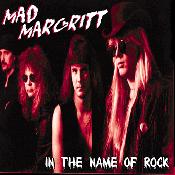 MAD MARGRITT
IN THE NAME OF ROCK
Released 1999 (Delinquent Records)

Review:
Picture yourself still in school and its 1987, your best friend calls you on the phone and says “Hey man! You gotta get over here, I just picked up a new album and it ROCKS!” You hustle over and coming from the speakers are the sounds that at first you would guess is a new Ratt or Poison release! Tunes like “Anyway (That You Want Me)”, “Give It Up” and “Cold Sweat” are excellent pieces of up-tempo, hook-laden, crankin’ in the car, catch yourself singing along, sleazy rock!

The four guys from Mad Margritt formed in Miami, Florida in the early 90’s and released their debut CD Cold Sweat on their own record label in 1997. After local radio stations started playing songs like “Anyway (That You Want Me)” combined with extensive touring Mad Margritt caught the attention of Delinquent Records who released their aptly titled In The Name Of Rock full length CD comprising of songs from their self produced five song CD plus five more additional hard rocking tunes to complete its bombastic manifestation. No surprise the Atlanta Rock Awards presented Mad Margritt with the award “Best Rock Band”. I concur! www.madmargritt.com