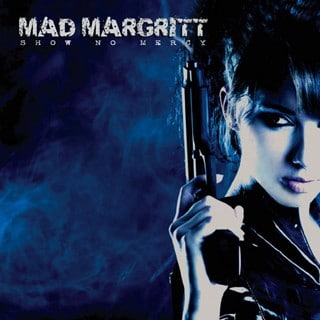 Review:
Extra, extra… read all about it: Local band proves perseverance pays off! That could easily be the headline for Mad Margritt‘s latest release seeing as six long years have passed since their previous effort Animal — an eternity in today’s music industry. Thankfully for fans of this Georgia foursome, Show No Mercy picks right up where that album left off.

“The Way You’re Loving Me” is a somewhat dark opener filled with blistering riffs and dreamy vocals that explode during the chorus — the song quickly proves that Mad Margritt are back in a big way. Sounding like it was born and bred on the Sunset Strip, one word can easily describe the album’s second track “I Can’t Get Enough” — fun. It is during this song that two thoughts come to mind — one, that the band’s newest guitarist Carl Culpepper is an excellent addition and two, the mix of the album is a letdown (but more on that later). The ballad “Ever Since You’ve Been Gone” is another cool track because, like the majority of the album, it contains Mad Margritt‘s signature choruses that contain massive harmonies and backing vocals.

Culpepper once again shows off his chops during the slightly funky “Down In Flames”, another straight-forward rocker that is layered with harmonies and a heavy bass. Although there are a few missteps — like covering what some consider AC/DC‘s shining moment (you just can’t top the original) and the chugging closer “Breaking Down” — Show No Mercy is a very enjoyable album. The biggest offense, as mentioned earlier, is the production and mix of the CD — an issue that might not bother hardcore fans because it has plagued the group in the past. Often it sounds as if the band were recording inside a sardine can, which means Brandon Faulkner‘s drum have very little power.

If you’re new to Mad Margritt, despite the fact they have been on the scene for well over a decade, think Tora Tora stripped of their southern blues overtones. With a couple line-up changes, and such a long hiatus, it is amazing that time hasn’t changed the Mad Margritt formula in the least — that’s dedication and talent for you. Obviously the members of Mad Margritt are solid songwriters and musicians, but I think it’s time to relinquish some control on the production side of things, then they could go from great to flawless!