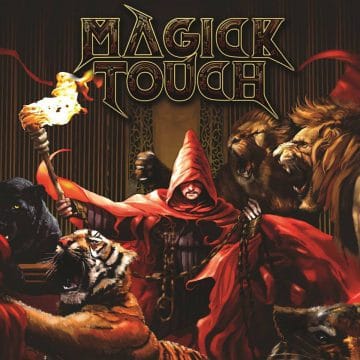 Review:
Sophomore slump? Ha! For those unfamiliar with this colloquialism, it implies the lack of ability to follow up an endeavor, contribution or event. This affliction is an albatross for some who sell their fortune on their debut and then either disappear or their “sophomore” effort doesn’t hold a candle to the maiden effort, but this is not the case with the latest offering from Norway’s Magick Touch and their second long play in as many years entitled Blades, Chains, Whips & Fire.

My love for Magick Touch has been shared with Sleaze Roxx readers previously when I reviewed their debut album Elektrick Sorcery and I touted and shouted from the rooftops for all to hear and to literally hear the greatness that was in the making. Magick Touch and their (should be) critically acclaimed debut Electrick Sorcery will not only be in a constant state of revolution in/or on your players, but will be a source of influence and envy for bands and musicians alike as they strive to capture what can only be described as the “Magick Touch.”

When looking at Magick Touch and their proficiencies, one has to just time travel to 1978 and those hazy, lazy summer Friday nights when your folks would go out on the town and the neighborhood cool chick would come over and babysit. Hey! In ’78, I was ten OK! The neighbourhood cool chick would bring with her stack of vinyls that would include the likes of Styx, Molly Hatchet, Deep Purple, KISS, Scorpions, Journey, Kansas and Head East (to name a few) that would tease and entice your aural faculties almost as much as she would inadvertently (whatever) toy with your yet to be fully developed libido and appreciation for the fairer sex. The result of those evenings would leave an indelible mark and an undying obsession with all things music and well, women of course.

As for Blades, Chains, Whips & Fire, I will triple dog dare anyone reading to drop the record player needle (figuratively of course don’t harsh out your players or vinyls) anywhere along the grooves and not hit gold. There is no such thing on this album as a skipping song or the dreaded F word — “filler.” No sir. Right from jump street, the way uptempo rocker and lead off video “Under The Gun”, you will need to strap yourself in as the next 40 minutes will be one hell of a ride! A ride filled, literally with fills, thrills, riffs, harmonies and every other staple necessary to ensure the listener’s full pleasure immersion in the effort. Which seems like a second nature affair for this power trio that will have you picking your jaw up from the floor repeatedly.

Next up “The Great Escape: is another in the stable of thoroughbred uptempo guitar driven rockers that showcases the co-vocal savior-fare of Christer and HK. Both tunes are in and out in under the three minute mark. Mega aural overload for such a compressed time frame and excellent is an understatement. “Midnight Medusa” has a nifty “Cat Scratch Fever”-esque opening riff that morphs into another Kings X layered harmony verse and a Sabbathy bridge. Too cool kiddos. “Believe In Magick” is as close to the Thin Lizzy moniker as Magick Touch can get without an out right cover tune. And yes, Magick Touch have all the pedigree and prowess to pull off Phil and company’s legacy of hits (maybe after the third long play — Magick Touch — a covers album?). The riff, the vocals, the progression and that dang outro chorus with that guitar riff and the bass pauses… Wow! Certainly a soon to be crowd favorite and without a doubt, a tune that has eminent top 40 potential and as radio friendly as anything ever.

“Polonium Blues” is a de-tuned Zak Wylde meets Ty Tabor riff show that continues the up tempo arena rock anthem theme, this one with a solo that should be tabbed and another outro solo with that “signature” tasty bass pauses and crazy hook laden harmonies. “Siren Song” and “Lost With All Hands” both start nice and chunky with Dokken-esque guitar riffage, thinking way back to Breaking The Chains era only that morphs into harmony slathered up tempo arena rockers sure to please. “Lost With All Hands” does include a mammoth Styx influenced break as well, which is a nice touch. “After The Fire” is a foot stomping number that would not sound out of place alongside a Diary of A Madman track with a more harmonically soulful vocal — think Phil Lynott or Ian Gillan on lead vocals and Mr. Rhoads and company supporting him for this one and you’ll get it.

“Electrick Sorcery” has that same Thin Lizzy meets early Dokken meets Kings X vibe that is a staple for Magick Touch. This song is another clinic in song structure, harmonic vocalizations, riffs and fills that just crush the listener and make it very very difficult to not shed a musical appreciation tear. I will say this boys, if and when you’re ready to remix this one from the 2:40 mark to about 2:52, I will lay down the cowbell that would have added just another feather in your already musically laden caps! Give it a listen and a try and let me know how it works out. The break is a nice homage to the horse who brought us here and why we continue to carry the rock n’ roll torch. Tailing up the long play is literally the longest song on the LP clocking in at a little over six minutes — “Blades, Chains, Whips & Fire.” It is nothing short of the epic Zeppelin-esque melodic hard rock anthem that I am certain the boys were striving for and we as lowly listeners are clamoring for. Supremely heavy, harmonic and holy crow h’awesome! Mega riffing abounds on this one as does a couple of tempo shifts that will knock your socks off.

“Blades, Chains, Whips & Fire” is a befitting ending to what will only ever be described as a stunning sophomore release from a band that will never know what a sophomore slump is. A band that for all intents and purposes will continue to astonish, amaze and blaze forward with its nostalgic twists and must hear style and sound. As mentioned, if you are not loving this disc or this band, music just might not be your thing. Maybe try bird watching, macrame or writing music reviews.

Magick Touch‘s “Under The Gun” video: