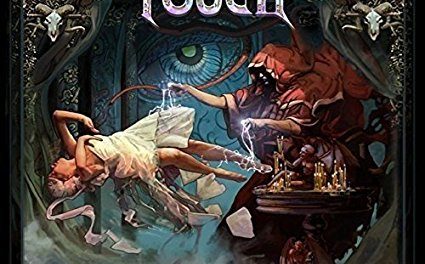 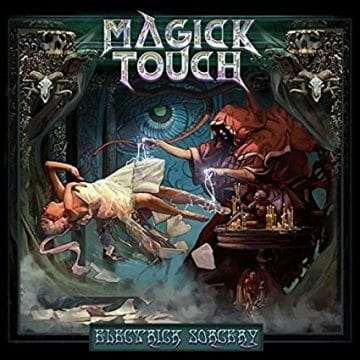 Review:
Magick Touch are a power trio with the emphasis on power from the southwestern coastal town of Bergen, Norway. The band’s lineage is a fruitful one and those of “faith” and a propensity for “circus” themed endeavors will already be quite familiar with the pedigree and proficiencies of Bård ‘Heavy’ Nordvik (drums), HK Rein (guitar, vocals) and Christer Ottesen (bass, lead vocals) within their respected crafts.

Magick Touch have compiled ten tracks of unbridled harmonic, melodic and catchiness with their ’70s and ’80s infused hard rock/AOR on their debut long play entitled Electrick Sorcery. Every time through the disc — aside from singing along, instantaneously toe tapping, head nodding and air guitaring like a fiend — I can not help but get transported to my youth, sitting in front of the radio and trying to catch and record to cassette (home made mix tapes — yeah we had to earn ’em — no MP3’s or internet for us kiddos) the latest single from Thin Lizzy, Styx, Rainbow, KISS, Toto, ELO and all those other wonderful saccharine laden radio friendly rock bands that not only inspired us all but wrote the soundtrack to our lives. Of course, Magick Touch embellish upon those aforementioned bands and while keeping those sensibilities that made them so perfect, incorporate a heaping helping of ’80s hard rock/AOR fueled acts that monopolized on these same influences. Think in lines of Badlands, “The Hunter” from Dokken, Kings X (very much so) and so forth. What the influences and Magick Touch‘s musical wherewithal does is paint a beautiful musical picture that fully immerses, captivates and ingrains.

As is known, the three piece that is Magick Touch are as proficient as any musicians on the scene today, or yesterday for that matter, and this propensity shines through blindingly on the monster radio friendly and yet innuendo laden album opener Love Rocket, with a huge hook, massive harmonies and very tasty fretwork. The atmosphere and overall take on Electrick Sorcery does not waver in the least through “Underwater Prison” (the lead off single and Thin Lizzy b-side — not really but it could have been to “The Boys Are Back In Town” with ease), “Trouble And Luck,” “Jokers vs Ace,” “Wildfire,” “Dead Man In Chicago, “Out Of Reality,” “Swansong” and “Loose Cannon.” “Reprise” is a nifty lil’ acoustic bridge/break that showcases Rein‘s guitar abilities a la Randy Rhoads‘ epic acoustic ditty “Dee.”

All the songs are heavy, melodic, harmonically laden and so tastefully crafted that unless you are tone deaf, hopelessly rhythm deficient, brain dead or such a hopeless hipster that admitting like of anything is your albatross, then Magick Touch and their (should be) critically acclaimed debut Electrick Sorcery will not only be in a constant state of revolution in/or on your players, but will be a source of influence and envy for bands and musicians alike as they strive to capture what can only be described as the “Magick Touch.”

Taken from the LP/CD “Electrick Sorcery” released by Edged Circle Productions on the 22nd of April 2016. All rights reserved. Copyright Magick Touch 2016. Pr…