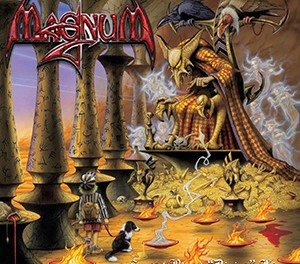 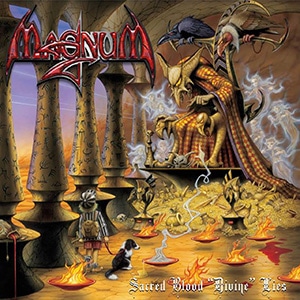 Review:
I must start this review of Magnum‘s new album, Sacred Blood “Divine” Lies, by saying that I’m not a lifelong fan of this legendary English rock band. I came to know of them through Bob Catley‘s contributions to projects that I’m a big fan of, namely Ayreon‘s 01011001 which then led me to get his solo album Immortal where he teamed up with Frontiers Records regular songwriter/axeman Magnus Karlsson to deliver an impressive hard rocking album. Of course, after that, he sung on four Avantasia albums (so far), a favourite “band” of mine, and I went and got a bunch of Magnum‘s records.

Sacred Blood “Divine” Lies is Magnum‘s 19th album to date and it retains the trademark sound that they’ve had since their birth in 1972 — hard rock with a little touch of AOR. As always, the core of the band is main songwriter and guitarist Tony Clarkin and vocalist Bob Catley, the latter’s tone being unique and instantly recognizable anytime he sings. They are joined once again by the band’s now stable line-up of Mark Stanway on keyboards, Al Barrow on bass and Harry James on drums.

I could, as I often do in my reviews, do a song by song analysis because truly they all have something of note. But I’ll keep it short this time around by only mentioning my favourite cuts. The title track “Sacred Blood ‘Divine’ Lies” is the opener of the album and it gives you a good idea of what’s to come. A set of straightforward hard rockers, with strong beats, and memorable melodies with catchy choruses. “Crazy Old Mothers” has a bit of everything and starts with Catley‘s voice accompanied by Stanway‘s keyboards — a combination that I’ve come to love. “Afraid of the Night” mixes hard rock with symphonic elements beautifully. “Twelve Men Wise And Just” has great vocal harmonies and “Don’t Cry Baby” closes the album with a bang.

As the saying goes: “All killer, no filler.” Sacred Blood “Divine” Lies is easy to recommend as it has a rewarding balance of all that is enjoyable about Magnum. It’s great that they managed to follow Escape From The Shadow Garden with an album just as good — if not better — especially considering that some other recent releases from Magnum haven’t been on this same level.