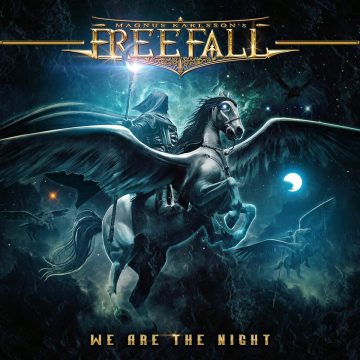 In 2013, Karlsson launched his solo project “Free Fall,” which was widely received by his enduring fans. Now on its third full-length album, We Are The Night (released June 12, 2020 via Frontiers Music Srl), Karlsson’s prolific songwriting, production skills and instrumental prowess (playing guitars, bass, keyboards and vocals) are on full display here, backed by a stellar cast of all-star singers. Rounding out the line-up is drummer Anders Kollerfors with mixing by Jacob Hansen (Volbeat, Primal Fear, Pyramaze, Anubis Gate).

Album opener “Hold Your Fire,” featuring Croatian singer Dino Jelusick (Animal Drive, Dirty Shirley), starts off wonderfully, decorated with soaring harmonies and top-notch performances from all involved. On “Kingdom Falls,” the newest powerhouse vocalist on the scene, Renan Zonta, who has been creating quite a buzz lately with the up and coming Brazilian hard rock sensation Electric Mob, lends his fantastic set of pipes, while Karlsson himself handles lead vocals on the title track, which introduces a bombastic orchestral section that returns quite frequently throughout the album (“Queen of Fire,” “Dreams And Scars,” “Don’t Walk Away”).

“Queen of Fire” introduces the soaring female vocals of Noora Louhimo (Battle Beast), who is becoming quite the in demand singer as of late, as she also just recently appeared on German power metal stalwarts Grave Digger’s latest record and possesses a commanding and immense vocal range here. “One By One” features  Ronnie Romero (Ritchie Blackmore’s Rainbow, Vandenberg), who gloriously proves why he’s become one of the most brightest and highflying vocalists in the scene today. “Temples And Towers” is the perfect vocal range for ex-Black Sabbath singer Tony Martin, as he returns again on the vibrant album closer “Far From Over.” The four-plus minute instrumental “On My Way Back to Earth” shows off Karlsson’s dynamic instrumental skills, while “Under the Black Star” introduces a Rainbow / Dio-esque modern vibe with soulful and emotive vocals by a returning Jelusick.

Karlsson has delivered one fine collection of melodic hard rock songs that proves why he’s one of the most sought after musicians in the game today. However, it’ll be interesting to see if he continues with this formula of using an all-star cast of guest vocalists on his next solo album.